Breathing is a fundamental function in life - ever wondered what really happens when we breathe? The air we breathe in has precious oxygen that fuels the breakdown of sugars and fat in our cells. In our lungs, oxygen diffuses into the blood, binds to hemoglobin and is transported to all the cells of our body (see the Molecule of the Month feature on hemoglobin). Carbon dioxide is a byproduct of sugar and fat breakdown in cells and needs to be removed from our body. Again, blood acts as a transport medium. Carbon dioxide diffuses out of cells and is transported in blood in a few different ways: less than 10% dissolves in the blood plasma, about 20% binds to hemoglobin, while the majority of it (70%) is converted to carbonic acid to be carried to the lungs. An enzyme present in red blood cells, carbonic anhydrase, aids in the conversion of carbon dioxide to carbonic acid and bicarbonate ions. When red blood cells reach the lungs, the same enzyme helps to convert the bicarbonate ions back to carbon dioxide, which we breathe out. Although these reactions can occur even without the enzyme, carbonic anhydrase can increase the rate of these conversions up to a million fold.

Carbonic anhydrase is an enzyme that assists rapid inter-conversion of carbon dioxide and water into carbonic acid, protons and bicarbonate ions. This enzyme was first identified in 1933, in red blood cells of cows. Since then, it has been found to be abundant in all mammalian tissues, plants, algae and bacteria. This ancient enzyme has three distinct classes (called alpha, beta and gamma carbonic anhydrase). Members of these different classes share very little sequence or structural similarity, yet they all perform the same function and require a zinc ion at the active site. Carbonic anhydrase from mammals belong to the alpha class, the plant enzymes belong to the beta class, while the enzyme from methane-producing bacteria that grow in hot springs forms the gamma class. Thus it is apparent that these enzyme classes have evolved independently to create a similar enzyme active site. PDB entries 1ca2 , 1ddz and 1thj , shown here from top to bottom, are examples of the alpha, beta and gamma carbonic anhydrase enzymes, respectively. The zinc ions in the active site are colored blue in these figures. Note that the alpha enzyme is a monomer, while the gamma enzyme is trimeric. Although the beta enzyme shown here is a dimer, there are four zinc ions bound to the structure indicating four possible enzyme active sites. Other members of this class form tetramers, hexamers or octamers, suggesting that dimer is probably a building block for this class.

Mammalian carbonic anhydrases occur in about 10 slightly different forms depending upon the tissue or cellular compartment they are located in. These isozymes have some sequence variations leading to specific differences in their activity. Thus isozymes found in some muscle fibers have low enzyme activity compared to that secreted by salivary glands. While most carbonic anhydrase isozymes are soluble and secreted, some are bound to the membranes of specific epithelial cells. For a deeper look at carbonic anhydrase from a genomic perspective, please visit the Protein of the Month feature at the European Bioinformatics Institute.

Carbonic Anhydrase in Health and Disease

Since this enzyme produces and uses protons and bicarbonate ions, carbonic anhydrase plays a key role in the regulation of pH and fluid balance in different parts of our body. In our stomach lining it plays a role in secreting acid, while the same enzyme helps to make pancreatic juices alkaline and our saliva neutral. The transport of the protons and bicarbonate ions produced in our kidney and eyes influence the water content of the cells at these locations. Thus carbonic anhydrase isozymes perform different functions at their specific locations, and their absence or malfunction can lead to diseased states, ranging from the loss of acid production in the stomach to kidney failure.

When there is a build up of fluid that maintains the shape of our eyes, the fluid often presses on the optic nerve in the eye and may damage it. This condition is called glaucoma. In recent years, inhibitors of carbonic anhydrase are being used to treat glaucoma. Blocking this enzyme shifts the fluid balance in the eyes of the patient to reduce fluid build up thereby relieving pressure. The structure of PDB entry 1cnw shows how one such inhibitor (a sulfonamide), colored green in the figure, is bound to human carbonic anhydrase (isozyme II). Note that this inhibitor binds near the active site and disrupts the interactions of the water bound to the zinc ion, blocking the enzyme action. Unfortunately, prolonged use of this drug can affect the same enzyme present in other tissues and lead to side effects like kidney and liver damage. 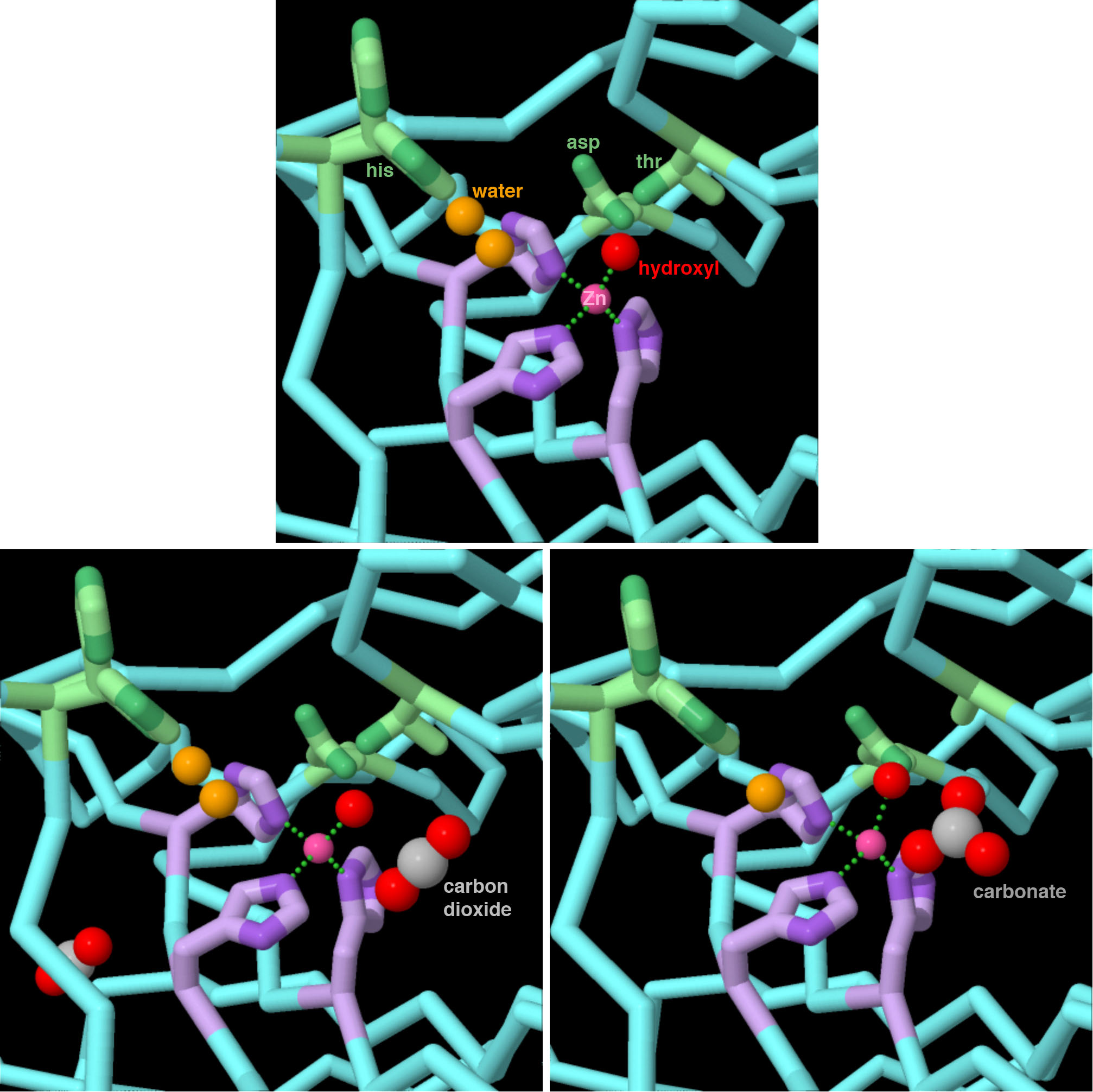 The alpha carbonic anhydrase enzymes have been well studied, leading to an understanding of how they work. Three structures are shown here, showing three steps in the process. The structure at the top (PDB entry 5dsj) is the empty enzyme. The active site includes a zinc ion (magenta), which is held by three histidines (purple). The zinc also coordinates a hydroxide ion (red). At bottom left (PDB entry 5dsi), carbon dioxide (red and gray) is bound and a glutamate and a threonine (green) assist with the reaction. At bottom right (PDB entry 1cam), the hydroxide has been added, forming carbonic acid. The threonine has been mutated to alanine to help capture the complex. The histidine at upper left (green), which was seen in two different conformations in the structure, assists with guiding one of the nearby water molecules (orange) to the zinc ion, and converting it to a hydroxyl. To explore these three structures in more detail, click on the image for an interactive JSmol.

doi:10.2210/rcsb_pdb/mom_2004_1
About Molecule of the Month
The RCSB PDB Molecule of the Month by David S. Goodsell (The Scripps Research Institute and the RCSB PDB) presents short accounts on selected molecules from the Protein Data Bank. Each installment includes an introduction to the structure and function of the molecule, a discussion of the relevance of the molecule to human health and welfare, and suggestions for how visitors might view these structures and access further details. More