Origin and Discovery of Diabetes

Diabetes is an old disease - ancient Egyptians documented clinical symptoms similar to those of diabetes mellitus in about 1500 BCE. Several ancient civilizations had recorded the fact that the urine of individuals with this condition had excess sugars (Ahmed, 2002). The condition was first called “diabetes” by the ancient Greek physician Aretaeus. “Mellitus” was later added to the name in 1675 by British physician and neuroanatomist Thomas Willis after rediscovering the sweet taste of urine and blood in patients. In 1889, German scientists Mering and Minkowski discovered the pancreatic origin of diabetes mellitus by showing that pancreactomy (removal of pancreas) in a dog could lead to diabetes-like symptoms. In 1910, Sir Edward Albert Sharpey-Schafer, founder of the field of endocrinology, discovered and named a hormone “insulin”, proposing that it was produced by the β-cells of the islets of Langerhans in the pancreas. In 1921 Frederick Banting and his medical student Charles Best showed that a protein extract from bovine pancreas containing insulin was able to lower blood glucose levels and effectively treat a pancreactomized dog. Soon thereafter they were able to apply this knowledge and treat terminally ill diabetic patients by injecting them with insulin. (See Timeline to learn more)

Insulin is a protein hormone, produced by specific cells in the pancreas called β-cell (pronounced beta cells, Figure 2). It is responsible for instructing cells in our body (primarily muscle and fat cells) to take in glucose from the blood and use it as a source of energy, store it for later use, or promote cell growth and proliferation. Without insulin, these cells are unable to use glucose and starve - i.e., the blood glucose levels in the individual may be significantly high, yet an inadequate supply of glucose in muscle and fat cells (starvation) can trigger mobilization of glycogen and fat stores. Over time, excess sugar in the blood binds to proteins in blood cells and tissues lining blood vessels by a chemical process called glycation. On the other hand abnormal lipid profiles, due to unusual lipid metabolism, can lead to formation of plaques and thickening of blood vessel walls. Collectively, these processes lay the foundations for various complications of diabetes. 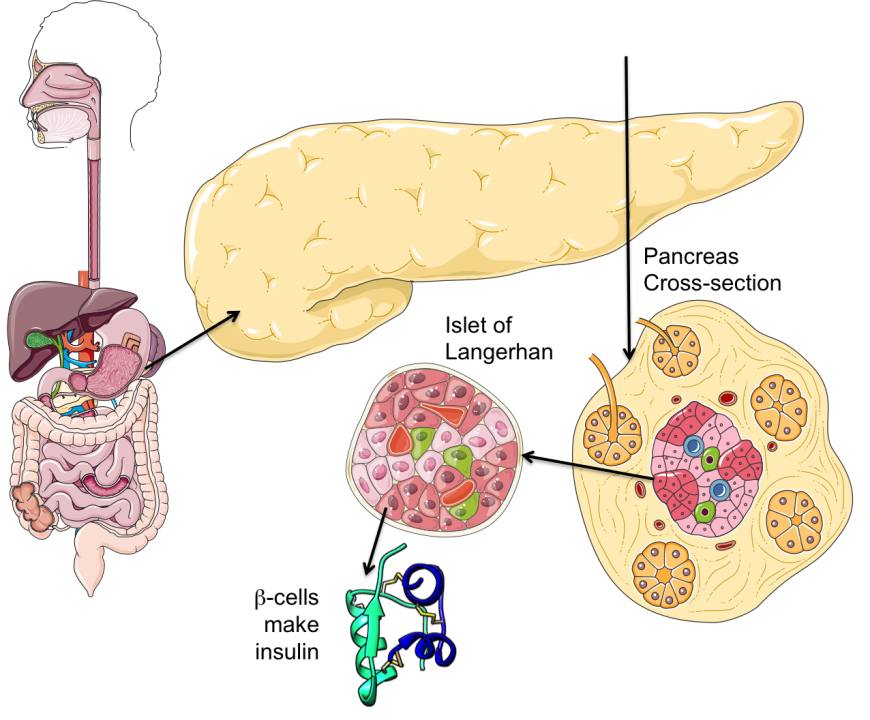 Figure 2: Pancreas is an organ located behind the stomach. Insulin producing β-cells are located in the pancreatic islets of Langerhans. The insulin molecule is also shown as a ribbon diagram (PDB ID: 1trz). Portions of the figure were adapted from Servier Medical Art.

The insulin molecule is made of 2 short protein chains (shown in green and blue in Figure 2). Note that these protein chains are held together by staple-like structures called disulfide bridges or bonds (shown in yellow). These linkages are formed between specific building blocks of the proteins - the amino acid cysteines. There are 2 inter-chain (between chain) and 1 intra-chain (within the chain) disulfide bonds in the insulin structure. The molecule shown here is called an insulin monomer, and is the form that binds to its receptor to carry out its function. Six such monomers come together to form Insulin hexamers - the storage form of insulin (not shown here).

Learn more about insulin monomers and hexamers by making a paper model and exploring its structure and activity.