This article was written and illustrated by Steven Arnold, Momodou Camara, Megan C. DiIorio, and Dhyan Ray as part of a week-long boot camp on "Science Communication in Biology and Medicine" for undergraduate and graduate students hosted by the Rutgers Institute for Quantitative Biomedicine in January 2021. 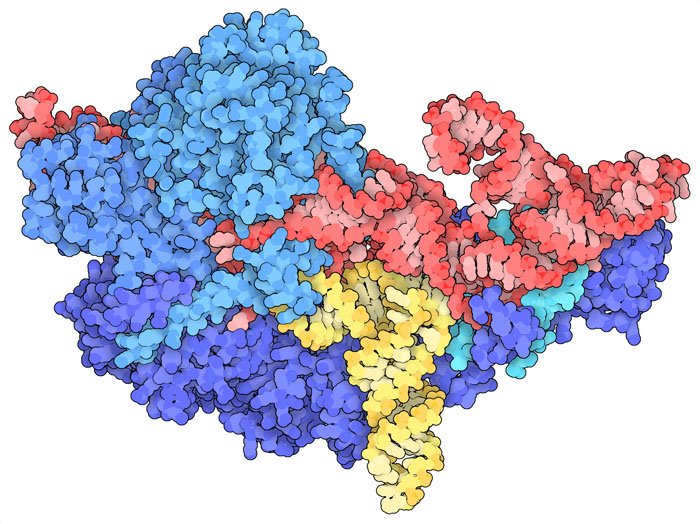 Prior to the discovery of ribozymes, proteins were believed to be the only biological molecules that could perform enzymatic reactions. In 1982, researchers were surprised to learn that RNA molecules exhibit catalytic activity, proving that nucleic acids are more than simple carriers of genetic information. Ribonuclease P (RNase P) and ribosomes are examples of ribozymes that perform key roles in the biosynthesis of proteins. RNase P cleaves pre-tRNA, generating tRNA (transfer RNA) molecules with mature 5’ ends that are ready to be utilized in translation, and ribosomes use these tRNA to build new proteins.

Transfer RNA facilitates protein synthesis by matching three-nucleotide codons of nucleic acids to their corresponding amino acids. As this process is paramount for cell survival, tRNA molecules are highly regulated and undergo extensive structural modifications after they are transcribed as pre-tRNA. Shown here in PDB entry 6ahu, the endonuclease RNase P cuts a small precursor segment from pre-tRNA, producing a mature tRNA molecule ready to do its job. Human nuclear RNase P is comprised of a 10-subunit protein and a large catalytic RNA strand. The individual protein components serve to stabilize and orient the RNA is such a way that allows for tRNA recognition and subsequent catalysis.

While both bacteria and archaea have just one type of RNase P, some eukaryotes have two kinds of pre-tRNA cleavers: a ribozyme RNase P that contains a catalytic RNA strand and a form that lacks RNA altogether, called protein-only RNase P (PRORP). Although both endonucleases perform the same function, they differ in both cellular location and structure. PRORP works in the mitochondria, cutting pre-tRNA involved in the expression of genes crucial for energy production that are encoded by a separate mitochondrial genome. The RNA-based RNase P, on the other hand, modifies pre-tRNA in the nucleus. Protein subunits of PRORP and RNA-based RNase P have analogous function but share no structural homology. 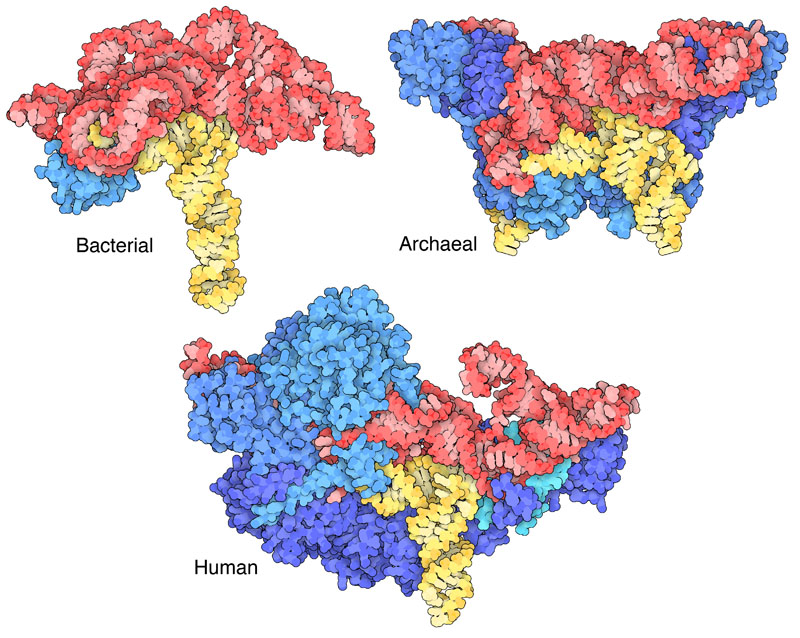 RNase P is one of two ribozymes present in nearly all organisms, with the other being the ribosome. This is evidence that a form of RNase P was present before the diversification of the three kingdoms of life. In fact, RNase P is hypothesized to be derived from an ancient RNA-based world. Differences in bacterial, archaeal, and eukaryotic nuclear RNase P are mainly seen in the protein content: more complex organisms generally contain a greater number of protein subunits. As shown in PDB entry 3q1q (top left), bacterial RNase P has a small protein subunit that accounts for only 10% of the total mass. Also shown is PDB entry 6k0b (top right), an archaeal RNase P that functions as a dimer with eight total protein subunits, and PDB entry 6ahu (bottom), a human nuclear RNase P composed of ten protein subunits. In all organisms, the catalytic RNA has a conserved sequence and structure. 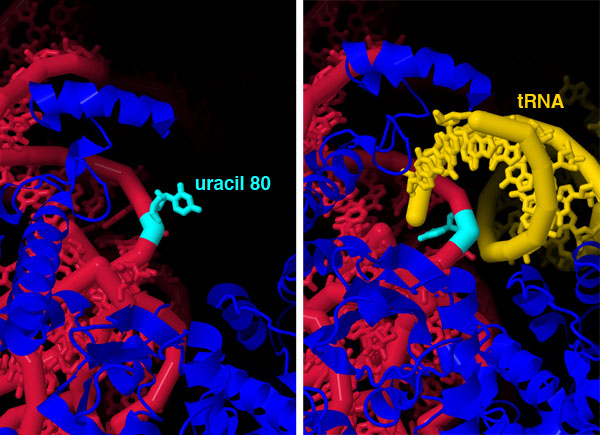 Uracil 80 (U80) is a conserved nucleotide of the human RNase P found in the ribozyme’s catalytic center. A close study of the nucleotides in the active site of RNase P reveal a conformational change in U80 upon binding tRNA. Superposition of RNase P with and without tRNA show bulging of U80 in the absence of tRNA (turquoise), creating a steric hinderance that renders catalysis inactive. When tRNA binds, U80 flips and turns catalysis on. Use the buttons to toggle between views of RNase P with and without tRNA (PDB ID 6ahu and 6ahr).

doi:10.2210/rcsb_pdb/mom_2021_8
About Molecule of the Month
The RCSB PDB Molecule of the Month by David S. Goodsell (The Scripps Research Institute and the RCSB PDB) presents short accounts on selected molecules from the Protein Data Bank. Each installment includes an introduction to the structure and function of the molecule, a discussion of the relevance of the molecule to human health and welfare, and suggestions for how visitors might view these structures and access further details. More