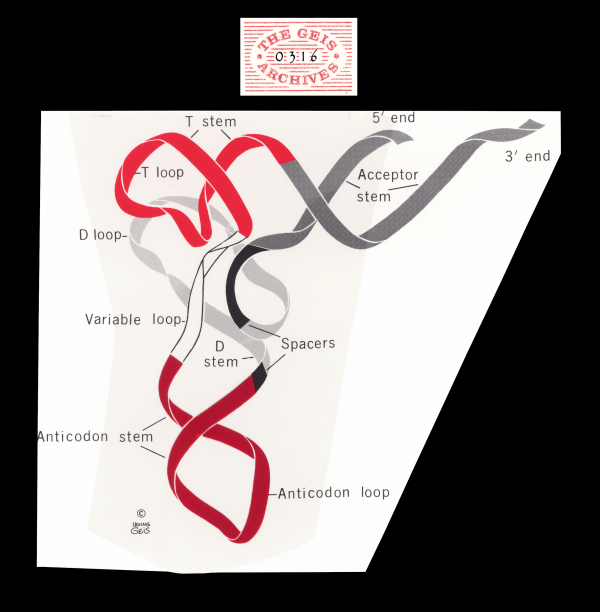 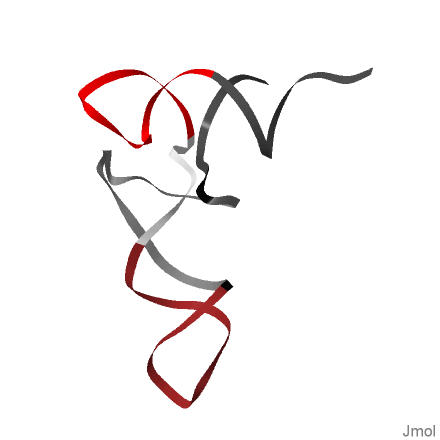 Molecule of the Month: Transfer RNA

RNA is a chain of nucleotides, which are each composed of a ribose (orange in static rendition), a phosphate group (orange-red in static rendition), and a base (adenine, guanine, cytosine, or uracil) (grey in static rendition) (Goodsell, 2001). All known tRNAs consist of 75 to 90 nucleotides. The canonical secondary structure of tRNA is a cloverleaf configuration, consisting of four short A-form double-helices. The tertiary structure of tRNA is an L-shaped configuration stabilized by interhelical stacking. This shape allows the tRNA to fit into the active site of the ribosome at the P and A sites. Amino-acyl tRNA synthetases are responsible for adding the proper amino acid to the tip of the tRNA. The amino acid is covalently bound to the 3'-hydroxyl group of the CCA tail, which is located at the 3' end of the protein.

tRNA acts as the bridge between messenger RNA codons and the nascent polypeptide chain during ribosomal synthesis (Goodsell, 2001). It contains an anticodon at one end and an amino acid for that particular codon at the opposite end of the L-shaped molecule. It recognizes and interacts with a specific nucleotide sequence of messenger RNA (mRNA) with its anticodon and adds the appropriate amino acid to the growing chain of amino acids during translation, which occurs in the ribosomes of the cell. For the depicted tRNA, the anticodon is AAG and phenylalanine would be bound to the CCA tail.