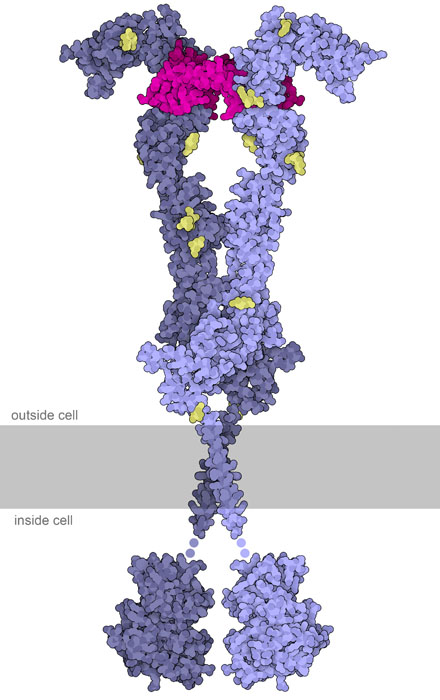 Active complex of VegFR (lavender) with VegF (magenta). The ectodomain (extracellular portion) of VegFR is decorated with sugars (yellow).
Download high quality TIFF image
This article was written and illustrated by Ethan Cartagena, Mariam Gelashvili, Jasmine Keyes, and Elizabeth Rosenzweig as part of a week-long boot camp for undergraduate and graduate students hosted by the Rutgers Institute for Quantitative Biomedicine. The article is presented as part of the 2022-2023 PDB-101 health focus on “Cancer Biology and Therapeutics.”

Our bodies continually build new blood vessels, ensuring that every cell gets the nutrients it needs. Cancer cells exploit this process, known as angiogenesis, to proliferate and spread. Angiogenesis is stimulated by vascular endothelial growth factor (VegF), a signaling protein. When VegF is released into the bloodstream, it begins a complex molecular dance that results in openings between cells. Precursor endothelial cells can then migrate into this opening, forming the lining of a new blood vessel. Cancer cells, especially the most aggressive types with the greatest ability to metastasize, manipulate the process of angiogenesis. By inducing the growth of new blood vessels into the tumor, the cancer can divert nutrients away from other organs and create a pathway in the surrounding tissue to grow quickly and spread.

Pairing Up for Activation

VegF delivers the signal to begin angiogenesis, which is received by its cellular receptor, a transmembrane protein called VegF receptor tyrosine kinase (VegFR). In the inactive state, the receptor exists as a single unit, traveling along the cell membrane like an iceberg floating through water. When it binds with VegF, however, it pairs off with another copy of itself, creating an active dimer, as shown here. Because the receptor is so flexible and structurally diverse, three PDB files were needed to create this illustration: the structures of the extracellular ectodomain (PDB ID 5t89), the transmembrane domain (PDB ID 2m59), and intracellular tyrosine kinase domain (PDB ID 3hng). The dimerization process brings together two copies of the tyrosine kinase domain inside the cell membrane, which allows them to activate each other. The active tyrosine kinases in turn stimulate other signaling proteins inside the cell. This begins the many processes needed for angiogenesis, including unzipping the adherens junction, as described below.

Since VegF signaling is an important step in growth of cancers, it is an attractive target for cancer therapy. Bevacizumab (Avastin) is a monoclonal antibody that binds to VegF and obstructs its binding to the receptor (shown below). When VegF is deactivated by binding to bevacizumab, the rate of VegFR dimerization slows, in turn slowing the process of angiogenesis. This prevents oxygen and nutrients from reaching the tumor as quickly, while reducing the number of opportunities that cancer cells have to detach from their original tumor and travel to a different part of the body. However, while treatment with bevacizumab is effective in inhibiting cancer cell proliferation, it can also cause serious side effects with other processes, such as slowing down wound healing. 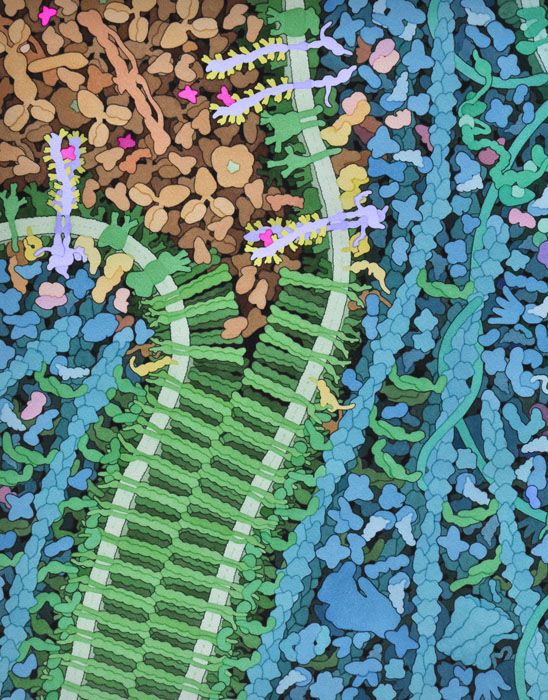 Signaling by VegF begins under nutrient-poor conditions, like those created by a fast-growing tumor, where lack of oxygen stimulates the production and release of VegF signaling proteins. VegF proteins travel through blood plasma, where they bind to the outer domain of VegFR and activate it. The signal is “transduced” across the membrane, and the VegFR kinase domains activate many other signaling proteins inside the cell. Some of these travel to the nucleus where they cause changes in the expression of genes involved in angiogenesis. The signaling proteins also phosphorylate the interior portion of cadherin proteins in the cell-cell interface, which induces the portion of the cadherins outside the membrane to open like two pieces of Velcro pulling apart. Precursor blood vessel cells are attracted to the opening and form the lining of a new blood vessel. 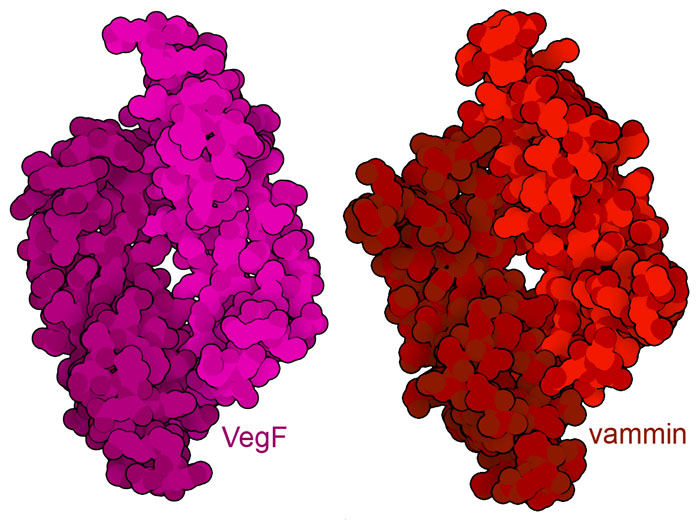 Angiogenesis is an important target for limiting the progression of metastatic tumors. In other cases, however, we may want to stimulate angiogenesis, to promote beneficial processes like wound healing. Researchers are currently exploring the possibility of using proteins that mimic the structure of VegF, which duplicate its function. For example, vammin (PDB ID 1wq8), a protein from snake venom, has high similarity to VegF (PDB ID 1vpf) in both 3D structure and sequence, and induces similar activation of VegF receptors.

The structure of bevacizumab with VegF (PDB ID 1bj1) shows that two bevacizumab molecules interact with VegF, blocking both ends of the VegF dimer (as seen on the left). Thus, it is unable to dimerize the receptor and unable to activate the angiogenic signaling cascade. As with most antibodies, highly-complementary interactions are formed between bevacizumab and VegF. For example, a set of three molecular interactions centered around a glutamine are critical for the binding of bevacizumab to VegF. These include hydrogen bonding interactions with a neighboring threonine, and hydrophobic interactions with tryptophan and isoleucine that constrain the glutamine in the proper conformation. To explore this structure in more detail, click on the image for an interactive JSmol.

doi:10.2210/rcsb_pdb/mom_2022_3
About Molecule of the Month
The RCSB PDB Molecule of the Month by David S. Goodsell (The Scripps Research Institute and the RCSB PDB) presents short accounts on selected molecules from the Protein Data Bank. Each installment includes an introduction to the structure and function of the molecule, a discussion of the relevance of the molecule to human health and welfare, and suggestions for how visitors might view these structures and access further details.More