TRPV1 is an ion channel that senses heat and contributes to pain sensation. 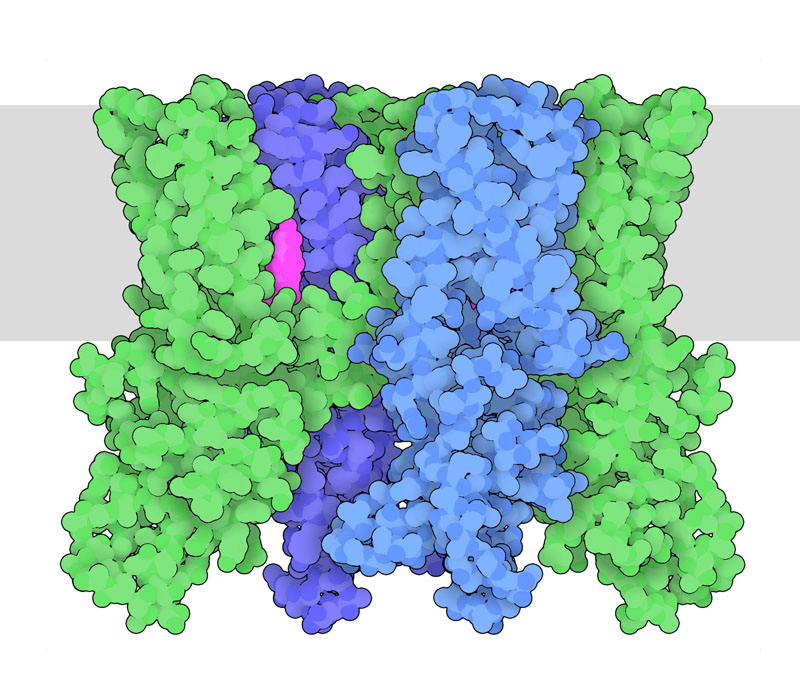 TRPV1 bound to capsazepine (magenta). The location of the membrane is shown schematically in gray.
Download high quality TIFF image
Have you ever wondered why some peppers taste hot? Spicy plants contain noxious chemicals that protect them, such as capsaicin in chili peppers and piperine in black pepper. Amazingly, TRPV1 is an ion channel that opens when activated by molecules like capsaicin, or when the temperature gets very hot. So, it contributes to our ability to sense both heat and spicy food, triggering similar sensations.

TRPV1 is part of a large superfamily of transient receptor potential (TRP) ion channels that respond to a wide array of physical and chemical stimuli, including cold, cooling agents like menthol, acidity, and bioactive lipids. TRP channels have similar overall structures with four identical subunits that form a channel that opens and closes in response to a particular stimulus, letting cations flow across the membrane. The “V” in TRPV1 refers to “vanilloid” molecules such as capsaicin that bind to the protein.

PDB entry 5is0 shows TRPV1 bound to a molecule that resembles capsaicin. The molecule binds in a pocket between subunits, near one of the gates that control ion flux through the channel pore. This structure was determined by purifying the channel and inserting it into lipid nanodiscs, which were then examined using electron cryo-microscopy. If you look at the cryoEM maps at the EMDataBank (EMD-8119), you can see the lipid nanodisc surrounding the membrane-spanning portion of the protein. 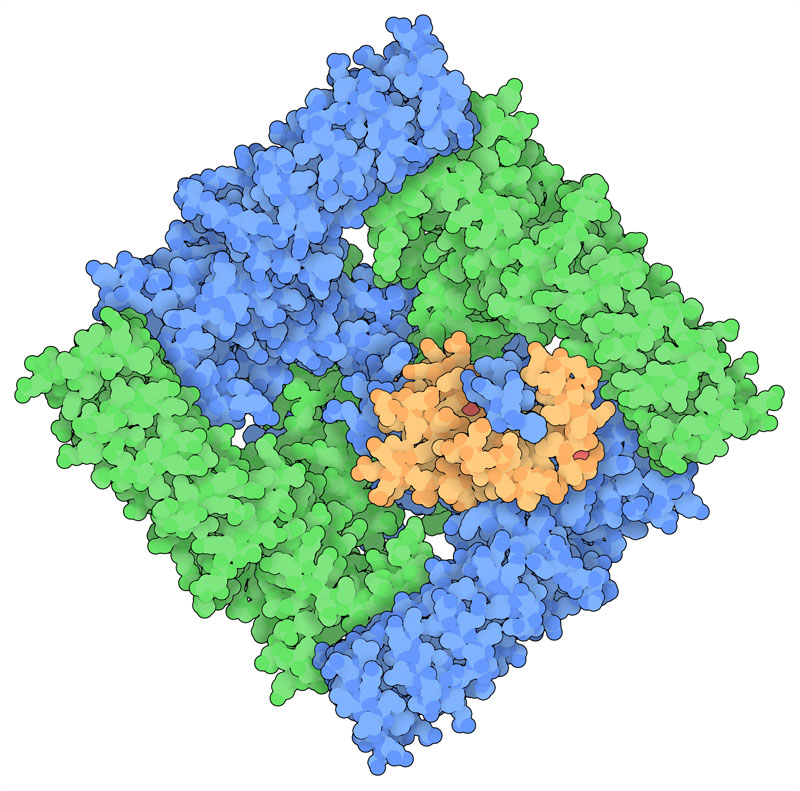 The TRPV5 channel plays a slightly different role. It is found in the kidneys where it helps to reabsorb calcium so that we don't excrete it. Unlike TRPV1, TRPV5 is usually open, allowing calcium to flow back into kidney cells from the urine. But, if the amount of calcium gets too high, the calcium-sensing protein calmodulin is recruited to the TRPV5 channel to stop the flow of calcium into the cell, as seen here in PDB entry 6dmw. 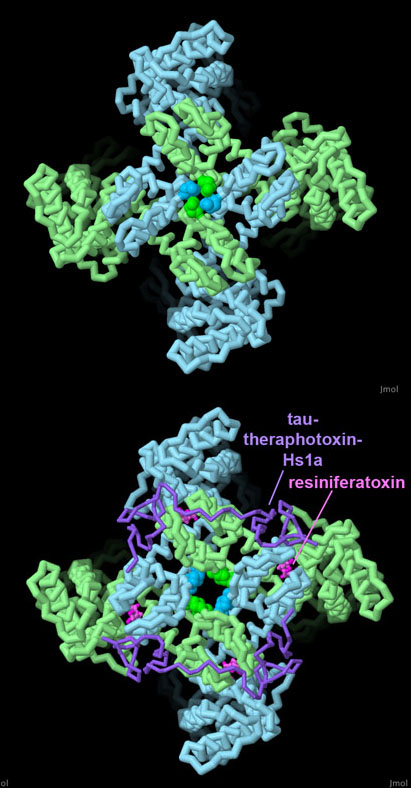 Cryoelectron microscopy has allowed researchers to capture TRP channels in many different states. PDB entry 5irz is the closed TRPV1 channel, with several rings of amino acids forming constrictions that block the ion pore. In 5irx, the channel is held open by the binding of two toxins (shown in purple and magenta), shifting the location of these amino acids to open the ion conducting pathway. To explore these structures in more detail, click on the image for an interactive JSmol.

doi:10.2210/rcsb_pdb/mom_2020_10
About Molecule of the Month
The RCSB PDB Molecule of the Month by David S. Goodsell (The Scripps Research Institute and the RCSB PDB) presents short accounts on selected molecules from the Protein Data Bank. Each installment includes an introduction to the structure and function of the molecule, a discussion of the relevance of the molecule to human health and welfare, and suggestions for how visitors might view these structures and access further details. More