The weedkiller Roundup attacks a key enzyme involved in the construction of aromatic compounds. 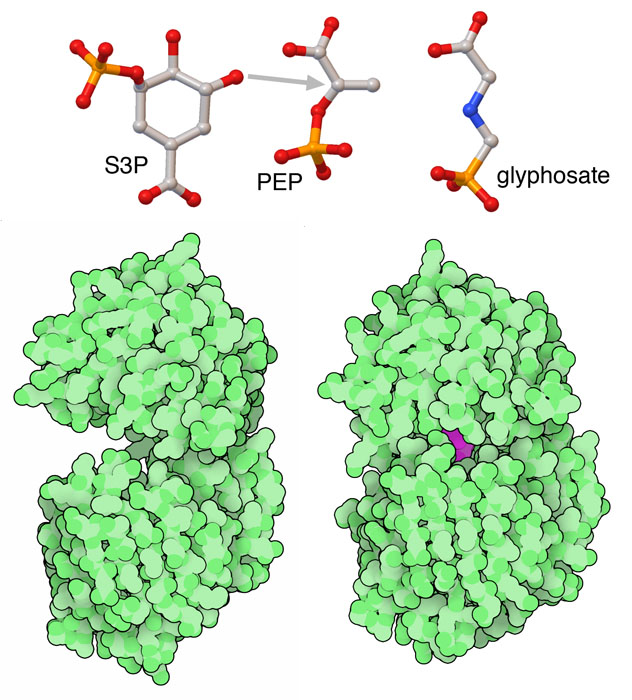 Open and closed forms of EPSP synthase are shown at the bottom, and the reaction it performs is shown at the top, along with the herbicide glyphosate.
Download high quality TIFF image
Biotechnology scientists often look for differences between organisms as a way to discover useful new compounds. In medicine, for example, scientists look for antibiotic compounds that target pathogenic bacteria but not people. In agriculture, pesticides attack common pests but spare the plants they eat, and weedkillers target unwanted plants that can overtake a crop. The trick is to find a molecule that does the job without unacceptable side effects.

Plants, along with fungi and many microorganisms, are able to build aromatic compounds, such as tyrosine and folates, from scratch. Animals, on the other hand, don’t have the necessary enzymes to create these molecules, so we rely on getting them in our diet. The enzyme EPSP synthase performs a key step in the synthesis of aromatic compounds. It connects a ring-shaped shikimate-3-phosphate (S3P) molecule to phosphoenol pyruvate (PEP). Later in the process, the shikimate ring will be modified to form the aromatic ring in tyrosine, and the PEP will become the amino/acid backbone of the molecule.

In the 1970s, researchers at Monsanto discovered that glyphosate acts as a powerful herbicide, marketing it as “Roundup.” It works by mimicking PEP, blocking the reaction performed by EPSP synthase and ultimately killing the plant. This is useful for eradicating weeds in localized areas—for instance, it is often sprayed on weeds growing along roads or in cracks on the sidewalk. It’s not as effective, however, for use in agriculture, because it would kill the crop along with the weeds. To solve this problem, researchers have also discovered bacteria that have forms of EPSP synthase that are resistant to glyphosate. The one shown here (PDB entries 2gg4 and 2gga) is an example. The crop plants are then engineered to use this resistant enzyme, and glyphosate can be used to kill the weeds but not the crop. 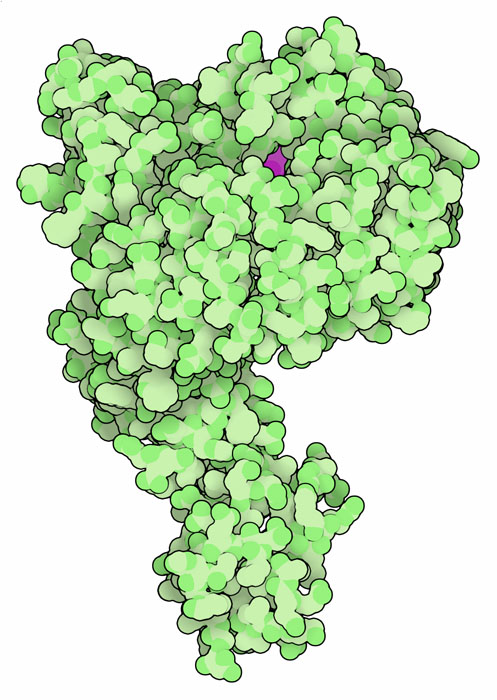 Other herbicides attack sensitive proteins unique to plants. The most commonly used one is 2,4-dichlorophenoxyacetic acid, often called 2,4-D, which mimics the auxin hormones used by plants to control growth. The structure shown here, from PDB entry 2p1n, shows the herbicide bound to TIR1 ubiquitin ligase, the enzyme that senses levels of auxin in the plant. Binding of 2,4-D to this enzyme ultimately changes the expression of many genes, leading to uncontrolled growth that kills the plant.

EPSP synthase becomes resistant to glyphosate by constricting the active site. These three structures show how this is done. The first structure (PDB entry 2pqb) shows a transition state analog bound in the active site of a glyphosate-resistant enzyme. The analog is similar to an intermediate state of the reaction, where S3P has just formed a bond to PEP, but the analog is unable to complete the reaction, so it stays in the active site and may be observed by crystallography. The second structure (PDB entry 2gga) shows how glyphosate mimics PEP, taking its place. An alanine amino acid, however, crowds the herbicide and greatly weakens its binding strength. This alanine is typically a smaller glycine in glyphosate-susceptible forms the enzyme. The third structure (PDB entry 2ggd) shows that if this change is made in the protein, glyphosate binds in a more stable, extended form, and the enzyme is effectively inhibited by the herbicide.

doi:10.2210/rcsb_pdb/mom_2018_2
About Molecule of the Month
The RCSB PDB Molecule of the Month by David S. Goodsell (The Scripps Research Institute and the RCSB PDB) presents short accounts on selected molecules from the Protein Data Bank. Each installment includes an introduction to the structure and function of the molecule, a discussion of the relevance of the molecule to human health and welfare, and suggestions for how visitors might view these structures and access further details. More