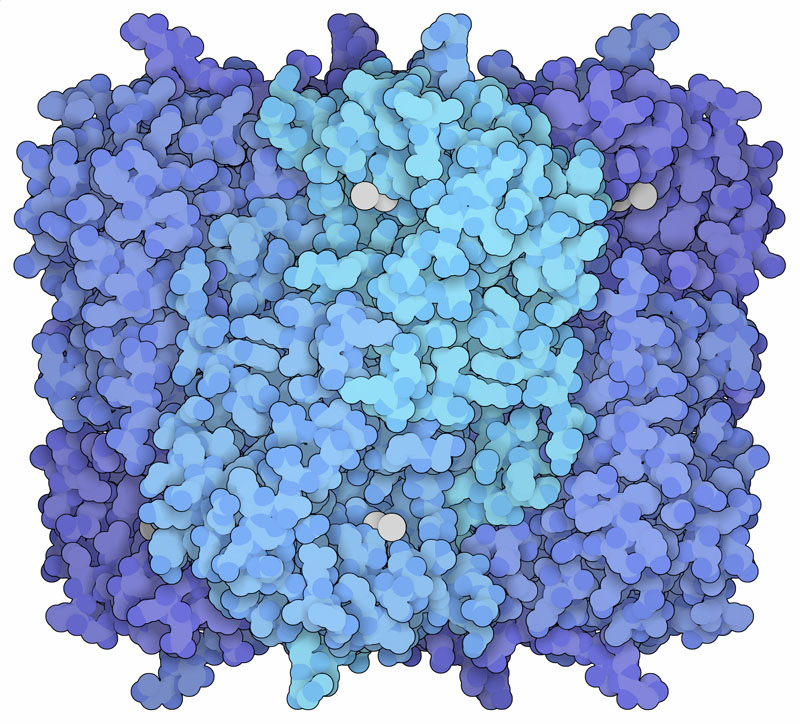 The enzyme 5-aminolaevulinic acid dehydratase (ALAD) is composed of eight subunits, each poisoned by two lead ions (gray spheres) in this structure.
Download high quality TIFF image
Lead ions are not used by our cells, but they pose a constant danger to them. Lead is common in the environment, and since it is so easy to extract and shape, it has been used throughout human history to build pipes, to create shiny glazes on pots and brilliant white pigments for paints, and for many other useful things. Unfortunately, when these lead ions get into our bodies, they can bind to proteins, displacing the proper metal ions and corrupting their function. The result can be deadly as proteins in the brain and other organs are poisoned.

One of the proteins poisoned by lead is involved in the synthesis of heme: 5-aminolaevulinic acid dehydratase (ALAD), also known as porphobilinogen synthase. ALAD performs the first step in production of heme rings, using a zinc ion to help catalyze the reaction. As shown in PDB entry 1qnv, lead ions displace these zinc ions, making the enzyme inactive. This process blocks formation of new heme groups and leads to one of the common symptoms of lead poisoning: anemia.

Lead poisoning has lasting effects because it slowly builds up in the body. It is cleared within a month or so from proteins in the blood, but it lasts for years in the brain and decades locked up in bones. Lead poisoning is particularly dangerous to growing children because proteins involved in development of the central nervous system are very sensitive to lead. As a result, our society has worked hard to reduce accidental exposure to lead, for example, by banning lead paints and leaded gasolines. But problems still crop up, such as the combination of acidic river water and lead pipes that caused widespread lead poisoning in Flint, Michigan. 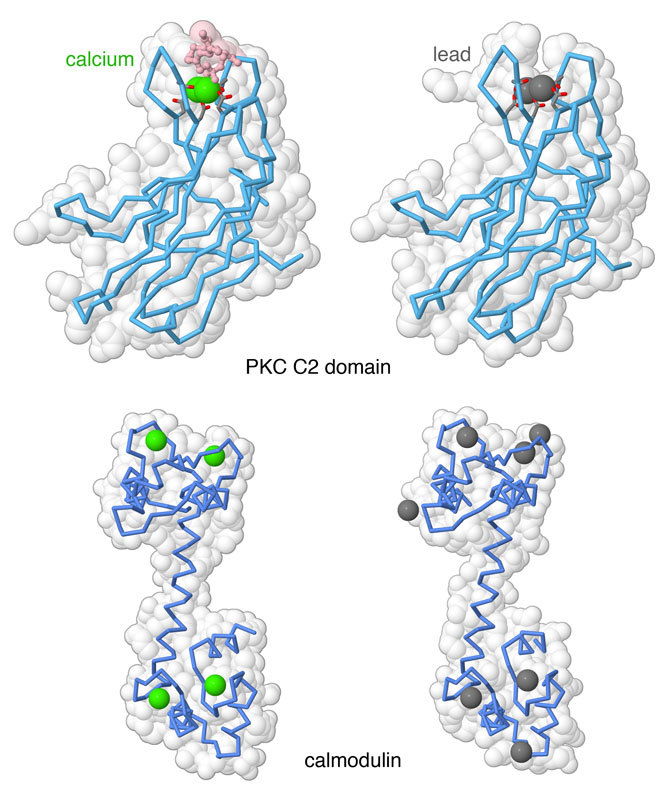 Many signaling proteins use changing levels of calcium to regulate cellular activities. Lead poisons these proteins by interacting with their calcium-binding sites and reducing their sensitivity to calcium levels. Two examples are shown here. Protein kinase C has a small domain that uses two calcium ions to tether it to cell membranes as part of its signaling process. Calmodulin captures four calcium ions as it delivers its signal. By comparing the structures of the proteins bound to calcium and to lead, we see that the lead occupies the calcium-binding sites in both proteins, as well as a few additional sites (PDB entries 1dsy, 3twy, 1exr, 2v01). 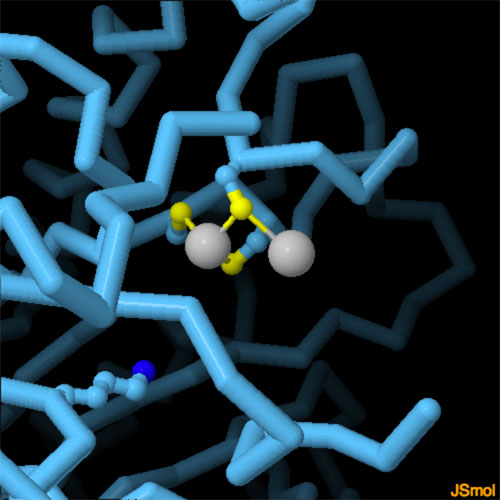 Enzymes use specific arrangements of amino acids to capture zinc and calcium ions. In ALAD, three cysteine amino acids are arranged in a triangle to coordinate zinc ions, and proteins like calmodulin often use acidic amino acids to capture calcium. Lead is more agnostic than these two ions and can bind to both types of sites. Click on the image to take a closer look at zinc, lead and mercury binding sites in ALAD (PDB entries 1ylv, 1qnv, 1qml).

doi:10.2210/rcsb_pdb/mom_2016_4
About Molecule of the Month
The RCSB PDB Molecule of the Month by David S. Goodsell (The Scripps Research Institute and the RCSB PDB) presents short accounts on selected molecules from the Protein Data Bank. Each installment includes an introduction to the structure and function of the molecule, a discussion of the relevance of the molecule to human health and welfare, and suggestions for how visitors might view these structures and access further details. More