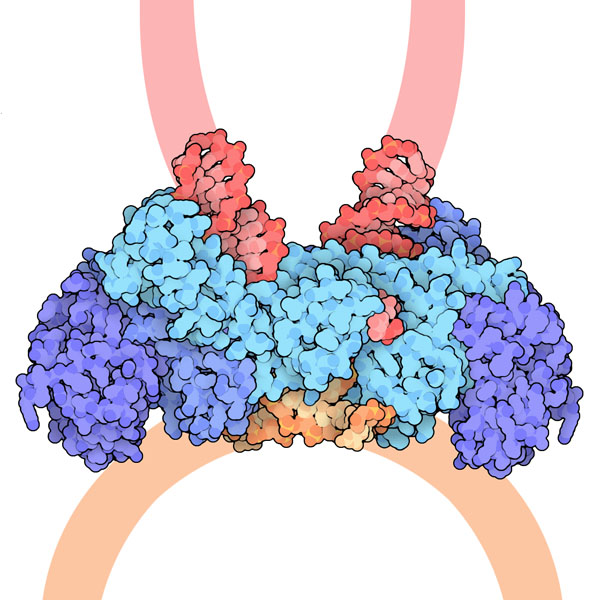 Integrase from prototype foamy virus bound to two short pieces of DNA. The rest of the DNA is shown schematically.
Download high quality TIFF image
Retroviruses, such as HIV, are particularly insidious. Most viruses infect a cell, force it make many new copies of the virus, and then leave when the cell is used up. Retroviruses, however, take a long-term approach to infection. They enter cells and build a DNA copy of their genome. Then, they insert this viral genome into the cell's own DNA. This integrated DNA can be used immediately to build more viruses, or it can stay dormant, waiting for the best time to start virus production. This is one of the many reasons that HIV is so hard to fight: it can lie waiting in these long-lived cells for years. 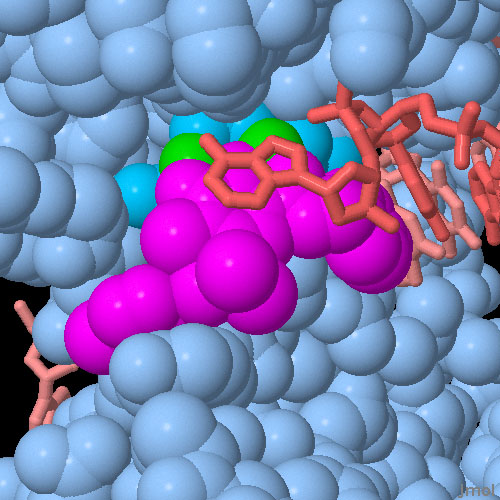 This close-up view of the integrase active site shows the binding of the anti-HIV drug raltegravir, shown in magenta. It binds to the two magnesium ions (in green). The drug also interacts with the last base of the DNA chain (red), which stacks on top of the drug.

Researchers have been studying HIV integrase for years, trying to understand how it works so that they can design drugs to fight AIDS. This work has led to the development of several effective drugs, including raltegravir, which is currently being used to treat HIV infection. So far, it has proven difficult to crystallize full-length HIV integrase and its complexes with DNA. The structures shown here are from a related retrovirus, prototype foamy virus (PFV). Although PFV is harmless, it is very similar to HIV integrase and provides an excellent model for studies of retroviral integration. 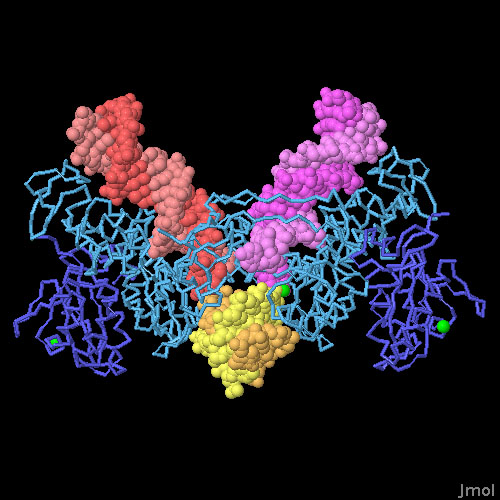 Structures of PFV integrase with DNA have revealed the critical steps of the integration reaction. Click on the image to explore two structures: the complex just after the intasome captures the target DNA (PDB entry 3os1 ) and the complex after the strand transfer reaction (PDB entry 3os0 ).

doi:10.2210/rcsb_pdb/mom_2011_3
About Molecule of the Month
The RCSB PDB Molecule of the Month by David S. Goodsell (The Scripps Research Institute and the RCSB PDB) presents short accounts on selected molecules from the Protein Data Bank. Each installment includes an introduction to the structure and function of the molecule, a discussion of the relevance of the molecule to human health and welfare, and suggestions for how visitors might view these structures and access further details.More