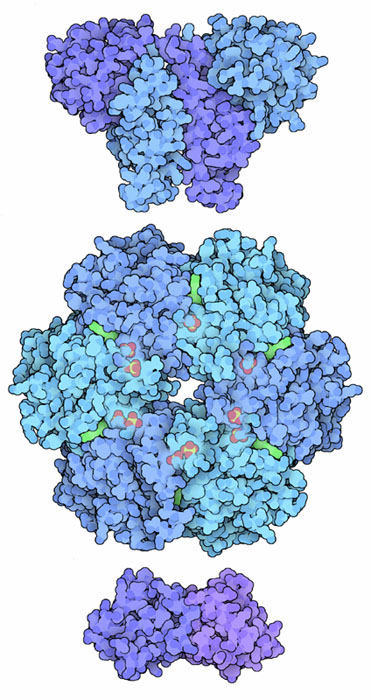 Circadian clock proteins KaiA (top), KaiC (center) and KaiB (bottom).
Download high quality TIFF image
Our cells contain tiny molecular clocks that measure out a 24-hour circadian rhythm. This clock decides when we get hungry and when we get sleepy. This clock can sense when the days are getting longer and shorter, and then trigger seasonal changes. Our major clock is housed in a small region of the brain, called the suprachiasmic nuclei. It acts as our central pacemaker, checking the cycles of light and dark outside, and then sending signals to synchronize clocks throughout the rest of the body.

Molecular processes occur so fast that is it difficult to imagine a 24-hour clock that works at the molecular level. But surprisingly, different organisms have evolved many different ways of doing this. Animal cells use a complex collection of proteins (with fanciful names like Clock, Cryptochrome, and Period) that are rhythmically synthesized and degraded each day. The 24-hour oscillation of the levels of these proteins is controlled by a series of interconnected feedback loops, where the levels of the proteins precisely regulate their own production. A much simpler system has been discovered in cyanobacteria. It is composed of three proteins, KaiA, KaiB and KaiC, that together form a circadian clock. At the beginning of the cycle, KaiA (at the top, PDB entry 1r8j ) stimulates the large KaiC hexamer (center, PDB entry 2gbl ), which then adds phosphate groups to itself. Then, as KaiC fills itself up with phosphates, it binds to KaiB (bottom, PDB entry 1r5p ), which inactivates KaiA and allows the phosphates to be slowly removed. As the number of phosphates drops, KaiB falls off and KaiA can start the cycle again.

These clocks have a period of about 24 hours, but as you can imagine, they are not exact. So cells have a way of synchronizing their clocks with the outside world. The clock in our brain is synchronized by exposure to light. Light is sensed by the retina, and signals are sent into the brain to modify the timing of the circadian oscillations. If you have traveled across several time zones, you have experienced this synchronization. For the first day or two, you experience jet lag because your clock is synchronized with the old schedule. But gradually, the bright light of day (blue light seems to work best) shifts your clock to bring you into alignment with the local time. 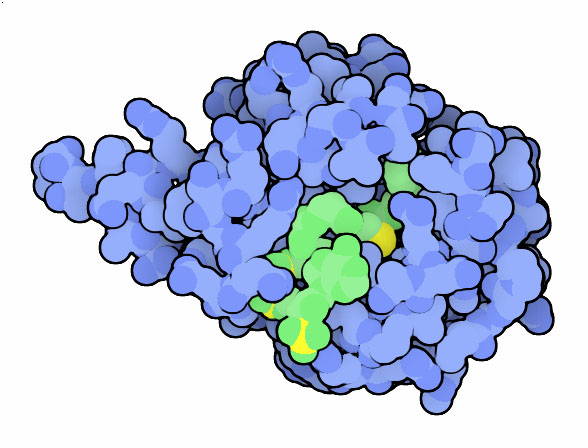 Serotonin N-acetyltransferase, with an analogue of the substrate (green) bound in the active site.
Download high quality TIFF image

The small hormone melatonin is produced selectively at night, and circulates through the blood to coordinate our nightly activities, such as sleep. Treatment with melatonin may be used to change this cycle artificially, for instance helping to shift cycles that are out of phase during jet lag. The daily rise and fall of melatonin is caused by changes in the levels of the enzyme serotonin N-acetyltransferase, shown here from PDB entry 1cjw . This enzyme adds a few atoms to the neurotransmitter serotonin, then a second enzyme converts it into melatonin. In this structure, the enzyme is caught in the process of performing the reaction--the large green molecule bound in the active site is similar to the intermediate formed as the acetyl group is added to serotonin. 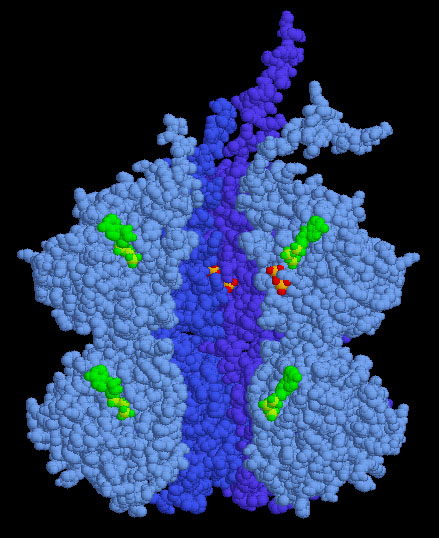 The KaiC clock protein (PDB entry 2gbl ) is composed of six identical subunits that form a barrel-shaped structure. The protein is shown from side here, with two subunits removed to show the tunnel that runs through the middle. The phosphates that tick off the hours of each day are added to a serine and a threonine on each subunit. They are buried deep inside the tunnel, near the binding site for ATP, shown here in green. KaiA stimulates KaiC to add these phosphate groups to itself, and KaiB blocks the action of KaiA, allowing KaiC to remove these phosphates from itself. The speed of these reactions are all calibrated so that the whole process takes 24 hours to complete. To explore this structure in more detail, click on the image for an interactive JSmol.

doi:10.2210/rcsb_pdb/mom_2008_1
About Molecule of the Month
The RCSB PDB Molecule of the Month by David S. Goodsell (The Scripps Research Institute and the RCSB PDB) presents short accounts on selected molecules from the Protein Data Bank. Each installment includes an introduction to the structure and function of the molecule, a discussion of the relevance of the molecule to human health and welfare, and suggestions for how visitors might view these structures and access further details.More