Molecule of the Month: G Proteins 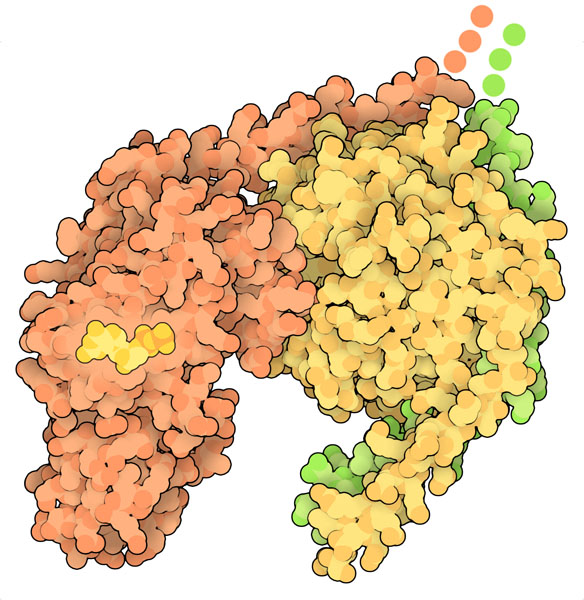 Inactive G protein with GDP bound. Two sites of lipidation are not included in the structure, and are shown schematically at upper right.
Download high quality TIFF image
Cells communicate by passing small, disposable messages to one another. Some of these messengers travel to distant parts of the body through the blood, others simply diffuse to a neighboring cell. Then, another cell picks the message up and reads it. Thousands of these messages are used in the human body. Some familiar examples include adrenaline, which controls the level of excitement, glucagon, which carries messages about blood sugar levels, histamine, which signals tissue damage, and dopamine, which relays messages in the nervous system.

In many cases, these molecular messengers never get inside cells. Instead, the message is picked up by a receptor on the cell surface and the signal is then passed from outside to inside through a chain of signaling molecules. G proteins, such as the one shown here from PDB entry 1gg2, form the central link in this chain of communication. The G protein system is the most common method of signaling in our cells. Thousands of G-protein-coupled receptors (GPCR) have been found on our cells, each waiting for its own particular messenger. Some, such as the glucagon receptor, recognize hormones and make changes in the level of metabolism. Others, such as the adrenergic receptor, are used in the nervous system to transmit nerve signals. Our sense of sight also relies on rhodoposin, a G-protein-coupled receptor that is sensitive to light, and a thousand different forms of these receptors, each recognizing the odor of a different molecule, control our sense of smell. They all share the combination of a receptor that receives a message and a G protein that delivers it inside the cell.

The "G" in G Proteins

G proteins are molecular switches that use GDP to control their signaling cycle. When GDP is bound, as shown here, the G protein is inactive. To activate the protein, the GDP is replaced with GTP, the G protein will deliver its signal, as shown below. G proteins come in many shapes and sizes. Most are used for cell signaling, but other types play an important role in other tasks, such as powering protein synthesis. The ones described here are termed heterotrimeric G proteins because they are composed of three different chains, denoted as alpha, beta, and gamma (shown in orange, yellow and green here).

These G proteins bind to the inner surface of the cell membrane, holding them close to their receptors. Several small lipids are attached to the protein chains, which insert into the membrane and tether the protein there. However, don't try to find these little lipids in the crystal structure file, because they were removed to allow crystallization.

The G protein system plays a central role in many signaling tasks, making it a sensitive target for drugs and toxins. Many of the drugs that are currently on the market, such as Claritin and Prozac, as well as a number of drugs of abuse, such as heroin, cocaine and marijuana, act at G-protein-coupled receptors in these signaling chains. Cholera bacteria make a toxin that attacks G proteins directly, by attaching a nucleoside group in a strategic place. This modification causes the G protein to be continually active. Among other things, this disrupts the normal controls on fluid balance in intestinal cells, and the infected person rapidly becomes dehydrated as water, sodium and chloride are lost. 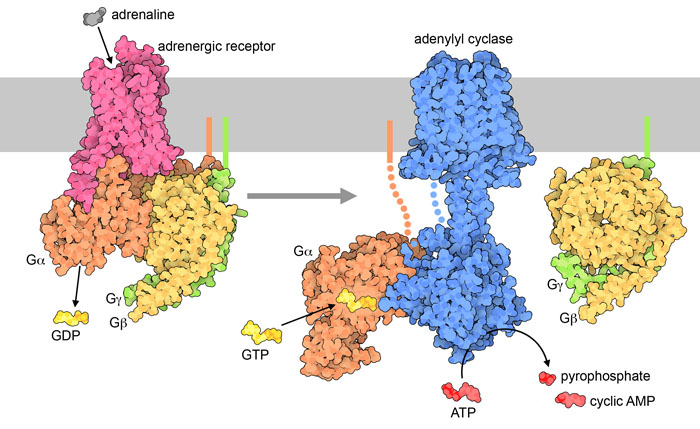 Signaling with G-proteins. Hormones like adrenaline bind to a GPCR receptor (left), which binds to a heterotrimeric G-protein and releases GDP. Then the G-protein separates into two pieces, and the G-alpha subunit binds to GTP and activates adenylyl cyclase (right).
Download high quality TIFF image

G proteins relay their signal on the inside surface of the cell membrane. The process starts when a receptor binds to its proper hormone or neurotransmitter, such as adrenaline (shown on the left using PDB entry 3sn6). This changes the shape of the receptor, and it binds to the inactive three-chain G protein inside. This causes the G protein to expel its GDP molecule and replace it with GTP. The GTP causes a small loop (shown in red in the Jmol below) to change shape, and the G protein falls into two pieces. The freed alpha subunit, with its bound GTP, then moves along the membrane until it finds the enzyme adenylyl cyclase (as shown on the right from PDB entry 6r3q and 1tbg). The little loop then binds to the enzyme and activates it. The activated adenylyl cyclase then produces lots of cyclic AMP, which spreads the signal through the cell. Eventually, the GTP in the active alpha subunit will break down into GDP, and the G protein will reform into its inactive, resting state.

One major advantage of this approach is that it allows the signal to be amplified. In the signaling chain shown here, a single molecule of adrenaline can stimulate the production of many molecules of cyclic AMP. By incorporating an enzyme (like adenylyl cyclase) into the chain, a weak signal from outside the cell can be translated into a strong signal throughout the inside of the cell. 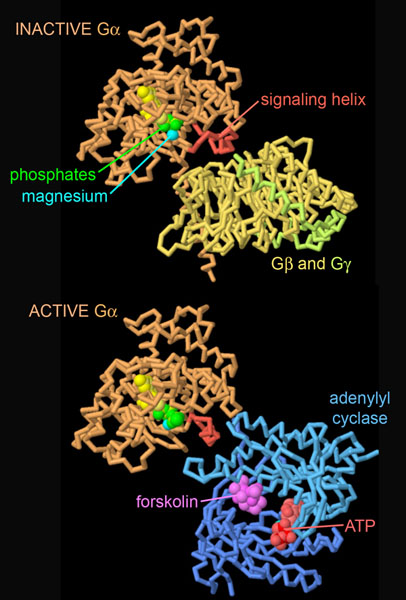 These two structures show how G proteins use GTP to switch to their active state. PDB entry 6eg8 is the inactive state with GDP bound. The two phosphates are shown in green here, and the signalling helix is shown in red. PDB entry 1cjk is the active form with GTP bound (notice that it is longer than the GDP), which pushes the signaling helix into a different conformation that is perfect for binding to adenylyl cyclase. This structure has an analog of ATP bound in the active site of adenylyl cyclase, and forskolin, a plant molecule that activates the enzyme, bound in a neighboring site. Click on the image to explore these structures interactively in Jmol. While you're doing that, be sure to try the cartoon representation to see the beautifully-symmetric propeller-shaped fold of the beta subunit in the inactive structure.

doi:10.2210/rcsb_pdb/mom_2004_10
About Molecule of the Month
The RCSB PDB Molecule of the Month by David S. Goodsell (The Scripps Research Institute and the RCSB PDB) presents short accounts on selected molecules from the Protein Data Bank. Each installment includes an introduction to the structure and function of the molecule, a discussion of the relevance of the molecule to human health and welfare, and suggestions for how visitors might view these structures and access further details.More