Key biosynthetic enzymes are regulated by their ultimate products through allosteric motions. 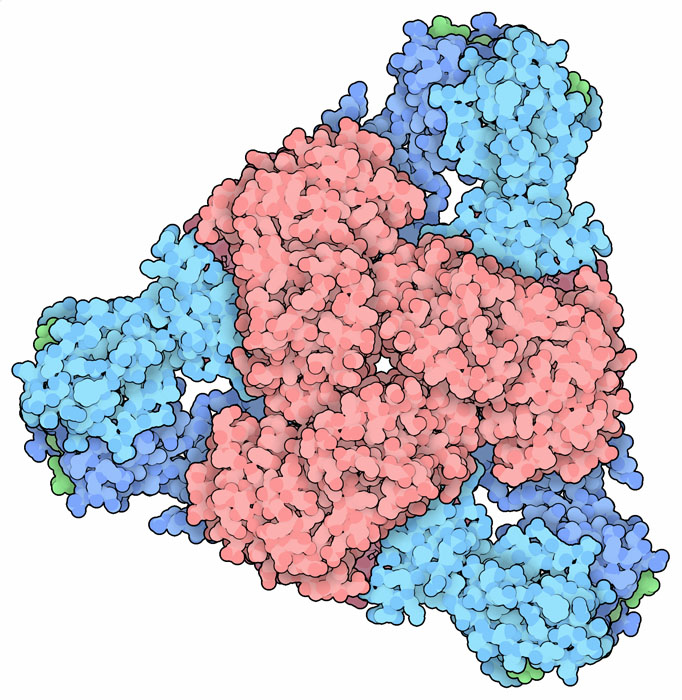 Aspartate transcarbamylase, with catalytic subunits in red, regulatory subunits in blue, and CTP in green.
Download high quality TIFF image
Cells often use assembly lines to create essential molecules like amino acids and nucleotides. An ordered pathway of enzymes work together, each making a specific chemical change to construct complex molecules from available starting materials. These assembly lines are usually carefully regulated, so that molecules are only made when they are needed. Often, this regulation occurs without a lot of administrative overhead—typically, the first enzyme in line will sense the current amount of the final product, and if there is enough, it shuts itself down, halting the whole assembly line. This has been termed “feedback inhibition,” and study of the enzyme aspartate transcarbamylase helped reveal how it’s done.

Aspartate transcarbamylase (ATCase) performs an early step in the production of pyrimidine rings, which are used to build nucleotides in DNA and RNA. Early studies found that Escherichia coli ATCase is regulated by the level of CTP, a nucleotide with a pyrimidine ring. Based on biochemical data, researchers proposed a model with two states: a “tense” T state that is inactive, and a “relaxed” R state that can perform the reaction. The structure revealed that ATCase is a large complex, with six catalytic chains arranged in the center, surrounded by three pairs of regulatory chains. The whole complex is usually in the inactive state, but the catalytic chains are cooperative: as with the cooperativity of the four chains of hemoglobin, binding of starting materials to a few active sites stabilizes the R state, making the whole complex more active. When CTP levels are high, however, it binds to the regulatory chains, stabilizing the inactive T state, as seen in PDB entry 5at1).

Regulated enzymes usually perform the first step that is unique to a pathway. The synthesis of pyrimidines starts one step earlier than ATCase, when the enzyme carbamoyl-phosphate synthase (CPSase) creates carbamoyl phosphate from several common cellular building blocks. However, this carbamoyl phosphate is also used to make the amino acid arginine. Some bacteria only make one form of CPSase, so it’s not the best enzyme to regulate, so pyrimidine synthesis is regulated by the second enzyme in the pathway, ATCase, which is only used to build pyrimidines. Our cells, however, have two different CPSases, one for pyrimidine synthesis and one involved in arginine synthesis. So in our cells, CPSase is the enzyme that regulates the synthesis of pyrimidines. 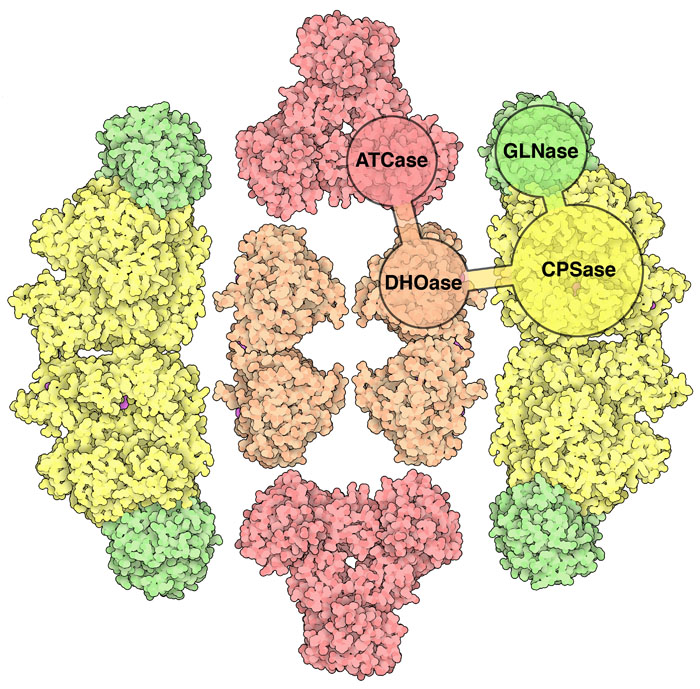 Three functional domains in CAD have been studied separately by x-ray crystallography by cutting the protein into pieces. In the intact protein, they are connected by flexible linkers, and come together to form a huge hexameric complex.
Download high quality TIFF image

In animal cells, ATCase is part of a large multifunctional protein, called “CAD”. Three steps of pyrimidine synthesis are performed by this huge complex. Two enzymes in glutamine-dependent carbamoyl-phosphate synthase (GLNase and CPSase) together create carbamoyl phosphate, ATCase connects it to aspartate, and dihydroorotase (DHOase) closes it into a ring that will be become the pyrimidine base (PDB entries 5dou, 4c6i, 5g1n). The CPSase shown here is the one involved in arginine synthesis, which is similar to the CAD CPSase. Bacteria also have all of these enzymes, but they are typically made as individual proteins that perform their tasks separately. Notice that the human ATCase portion includes only catalytic subunits, without the regulatory subunits found in the bacterial enzyme complex. 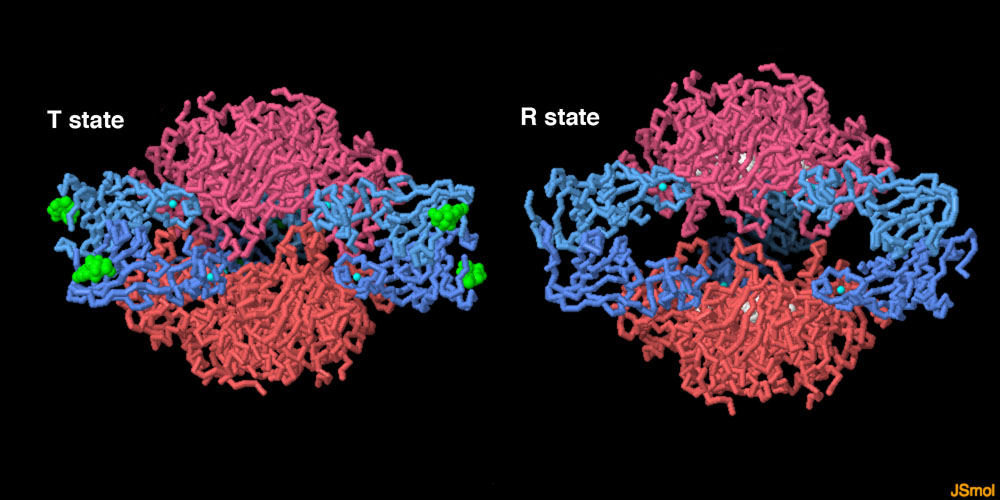 Dozens of structures of ATCase have been determined, capturing the enzyme in both the T and R states, and with a variety of substrates and inhibitors. Two are shown here, showing the amazing allosteric motion that occurs when the enzyme is activated. The T state structure (PDB entry 4fyw) has CTP bound and the R state structure (PDB entry 1d09) has an inhibitor bound in the active site that looks much like the substrates. To explore these two structures in more detail, click on the image for an interactive JSmol. You can also see artistic renderings of the states of ATCase in the Geis Archive.

doi:10.2210/rcsb_pdb/mom_2017_11
About Molecule of the Month
The RCSB PDB Molecule of the Month by David S. Goodsell (The Scripps Research Institute and the RCSB PDB) presents short accounts on selected molecules from the Protein Data Bank. Each installment includes an introduction to the structure and function of the molecule, a discussion of the relevance of the molecule to human health and welfare, and suggestions for how visitors might view these structures and access further details.More