Molecule of the Month: Glucose Transporters 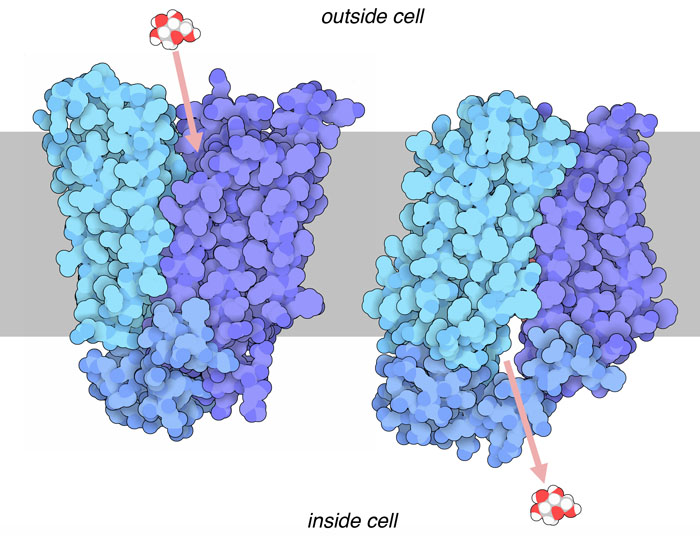 GLUT3 is shown on the left in the open outward conformation, and GLUT1 is shown on the right in an open inward conformation.
Download high quality TIFF image
Glucose is the fuel that powers most of the biosphere. Plants build it using energy from the sun, store it in starches and use it to build their infrastructure of cellulose. The glucose we eat is broken down through glycolysis and used to power the many processes of our cells. Thus, it is essential to supply each of our cells with a steady stream of glucose. Glucose is delivered throughout the body by the blood, and each cell gathers what it needs using glucose transporters.

The human genome encodes 14 similar transporters that deliver glucose and other sugars into different types of cells. For instance, GLUT1 (shown here from PDB entry 4pyp) manages the basal levels of glucose uptake and is very common in red blood cells. GLUT2 helps control the flow of glucose in and out of liver cells, and pancreatic beta cells use it to monitor the level of glucose in the blood, releasing insulin when the level rises. Nerve cells in the brain require a constant supply of glucose, so they use GLUT3 (PDB entry 4zwc), a form that works well even when glucose levels are low. GLUT4 is activated by insulin and is used by fat and muscle cells to gather glucose after meals.

When we eat a meal, insulin is released into the blood, telling cells that glucose is available. In response, fat and muscle cells move many GLUT4 transporters to their cell membranes, to gather a supply of glucose while it is plentiful. However, in people with type II diabetes, the body becomes resistant to the action of insulin—both in the production of insulin and in the sites where it acts. One consequence is that less GLUT4 is moved to the membranes of muscle cells after meals, so less glucose is taken up from the blood. This produces dangerously high levels of glucose in the blood, since our skeletal muscles normally consume the lion’s share of glucose. 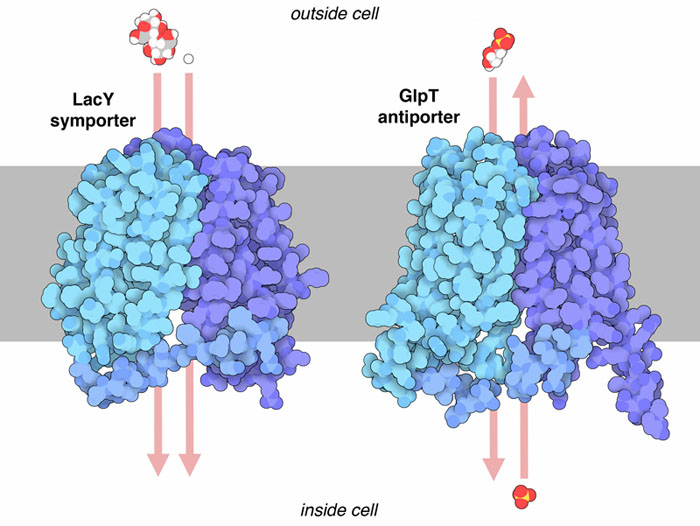 LacY transports lactose and hydrogen ions into the cell, and GlpT transports phosphate and glycerol-3-phosphate in opposite directions.
Download high quality TIFF image

The GLUT family is part of a larger group of transporters, collectively termed the major facilitator superfamily. They share a similar mechanism, with two domains that rock back and forth to transport molecules across membranes. Many, however, link transport of two different molecules, harnessing a large concentration gradient of one to power transport of the other. For instance, the bacterial lactose permease LacY (PDB entry 1pv6) uses a hydrogen ion gradient to power the transport of lactose. Both molecules move in the same direction into the cell, so LacY is named a symporter. On the other hand, GlpT (PDB entry 1pw4) is an antiporter that uses a gradient of phosphate ions to pump glycerol-3-phosphate in the opposite direction.

GLUT5, a fructose transporter (PDB entries 4ybq, 4yb9), has been caught in both the outward open and inward open states. GLUT1 (PDB entry 5eqi) has also been studied in a complex with the inhibitor cytochalasin B, which freezes the transporter in one state and blocks transport. Unwanted inhibition of glucose transporters can be important in medicine—for example, HIV protease inhibitors block the action of GLUT4 and lead to side effects during treatment. To explore these structures in more detail, click on the image for an interactive JSmol.

doi:10.2210/rcsb_pdb/mom_2017_4
About Molecule of the Month
The RCSB PDB Molecule of the Month by David S. Goodsell (The Scripps Research Institute and the RCSB PDB) presents short accounts on selected molecules from the Protein Data Bank. Each installment includes an introduction to the structure and function of the molecule, a discussion of the relevance of the molecule to human health and welfare, and suggestions for how visitors might view these structures and access further details.More