Molecule of the Month: Insulin Receptor 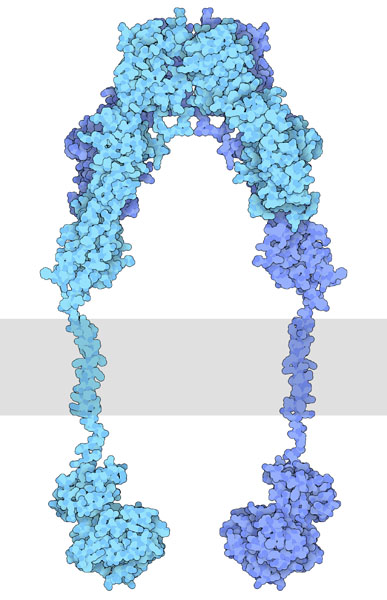 Cells throughout the body are fueled largely by glucose that is delivered through the bloodstream. A complex signaling system is used to control the process, ensuring that glucose is delivered when needed and stored when there is a surplus. Two hormones, insulin and glucagon, are at the center of this signaling system. When blood glucose levels drop, alpha cells in the pancreas release glucagon, which then stimulates liver cells to release glucose into the circulation. When blood glucose levels rise, on the other hand, beta cells in the pancreas release insulin, which promotes uptake of glucose for metabolism and storage. Both hormones are small proteins that are recognized by receptors on the surface of cells.

The receptor for insulin is a large protein that binds to insulin and passes its message into the cell. It has several functional parts. Two copies of the protein chains come together on the outside of the cell to form the receptor site that binds to insulin. This is connected through the membrane to two tyrosine kinases, shown here at the bottom. When insulin is not present, they are held in a constrained position, but when insulin binds, these constraints are released. They first phosphorylate and activate each other, and then phosphorylate other proteins in the signaling network inside the cell. Since the whole receptor is so flexible, researchers have determined its structure in several pieces: the insulin-binding portion is shown here from PDB entry 3loh , the transmembrane segment from 2mfr , and the tyrosine kinase from 1irk .

Problems with insulin signaling can impair the proper management of glucose levels in the blood, leading to the widespread disease diabetes mellitis. There are two common ways that this happens. Type I diabetes is caused by problems with insulin: in some cases, the pancreatic cells that produce insulin are destroyed by autoimmunity, and in other cases insulin is mutated and inactive. This often occurs early in life, and requires treatment with insulin to replace the missing insulin. Type II diabetes, on the other hand, most often occurs later in life, and is caused by an acquired resistance to the action of insulin on its receptor. The details are complex and involve phosphorylation of the receptor and its substrates, modifying their action in insulin signaling. The condition is treated with careful attention to diet, lifestyle and medication. 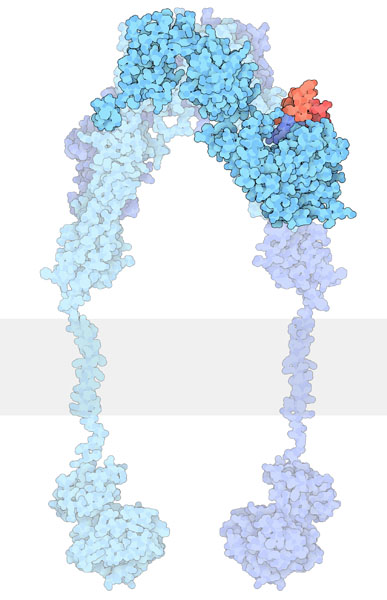 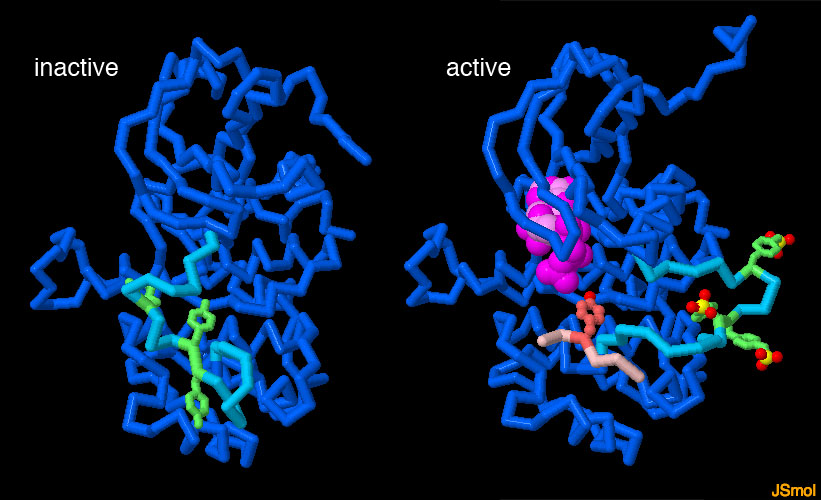 The tyrosine kinase portion of the receptor is itself a dynamic protein with many moving parts. The active site binds to ATP and uses it to phosphorylate its targets. In the inactive state (shown on the left, PDB entry 1irk ), a mobile loop (in bright turquoise) binds in the active site, blocking its action. When the receptor is activated, several tyrosines (green) on this loop are phosphorylated, causing it to swing out of the active site, allowing ATP (magenta) to enter (shown on the right, PDB entry 1ir3 ). Other signaling proteins (a small peptide from one is shown in pink) then bind and are phosphorylated on their tyrosine amino acids. To explore these two structures in more detail, click on the image for an interactive JSmol.

doi:10.2210/rcsb_pdb/mom_2015_2
About Molecule of the Month
The RCSB PDB Molecule of the Month by David S. Goodsell (The Scripps Research Institute and the RCSB PDB) presents short accounts on selected molecules from the Protein Data Bank. Each installment includes an introduction to the structure and function of the molecule, a discussion of the relevance of the molecule to human health and welfare, and suggestions for how visitors might view these structures and access further details.More