Molecule of the Month: DNA Methyltransferases

Your body is built of skin cells, nerve cells, bone cells, and many other different types of cells. These cells are different shapes and sizes, and each type of cell builds a characteristic collection of proteins that are needed for its function. However, every cell in your body contains the same genetic information, encoded in strands of DNA. How does each cell decide which genes to use and which ones to ignore? 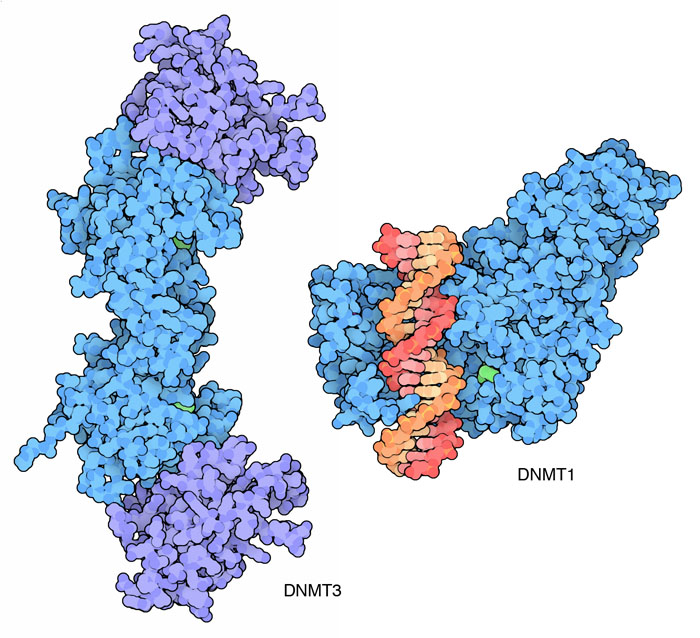 Scientists have discovered that the information in DNA does not end at the simple genetic sequence of bases. Cells layer additional forms of control on top of the genetic code, creating "epigenetic" information that modifies the use of particular genes. In some cases, this control is performed by the positioning of nucleosomes. In other cases, bases in the DNA are methylated, modifying how they are read during protein synthesis.

In the first minutes of life, when we are composed of a single cell, this epigenetic information has been wiped clean. In the fertilized egg, the methyl groups have been removed and every gene is like all the others. Then, as cells divide in the embryo, they have to make choices about what they are going to do--becoming skin cells or nerve cells or their particular fate. At this point, DNA methyltransferases come into play, and they add methyl groups to genes, shutting off some and activating others. The DNA methyltransferase DNMT3, shown here from PDB entry 2qrv , performs this important job, creating the proper epigenetic coding of methyl groups throughout the genome.

Once each cell has decided its fate, this epigenetic code must be maintained for the rest of the life of the organism. When a cell divides, the information must be transmitted to each of the new cells. The DNA methyltransferase DNMT1, shown here from PDB entry 3pt6 , performs this job. As DNA is being replicated, it adds the proper methyl groups to the new DNA strands. The information is propagated in a tricky way. Methyl groups are almost always added to cytosine bases with the sequence: 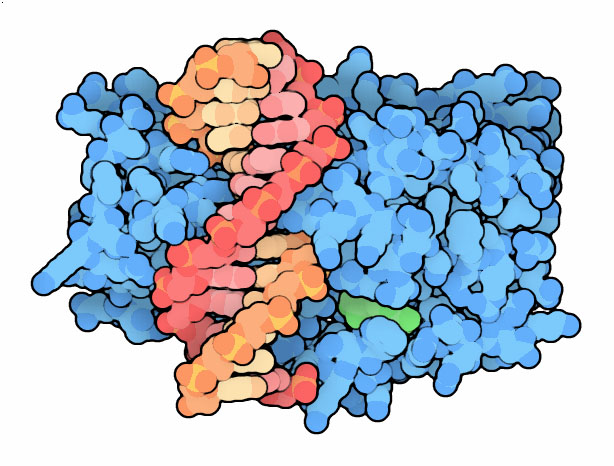 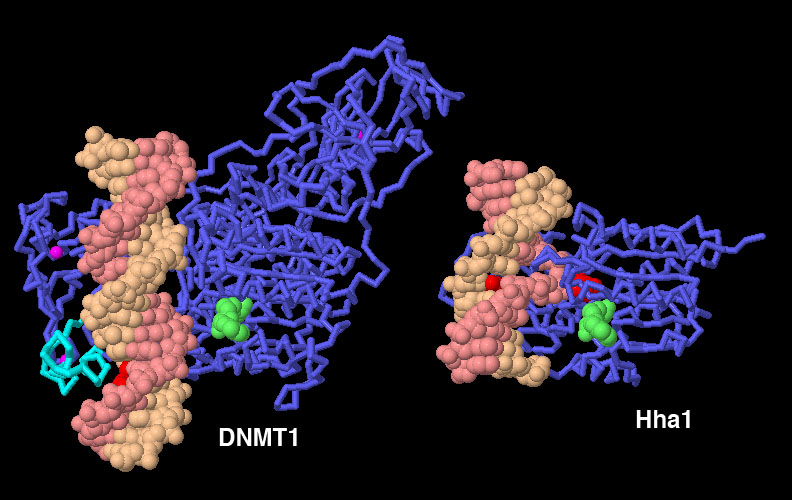 Several structures have helped to explain how DNA methyltransferases perform their jobs. PDB entry 3pt6 includes DMNT1 and a small piece of DNA. The enzyme wraps around the DNA and probes the edges of the bases in the DNA. This structure was solved using DNA with no methyl groups, which would normally not be a substrate of the enzyme. Sure enough, the structure shows that the enzyme recognizes the unmethylated bases on both sides, and holds the DNA away from the active site. There is currently no structure of DNMT1 with a half-methylated DNA, but we can get an idea of how it might act by looking at a bacterial methyltransferase, pdb entry 1mht . The DNA binds deeper in the active site, and flips out the cytosine base that will be methylated. To take a closer look at these structures, click on the images for an interactive Jmol.

doi:10.2210/rcsb_pdb/mom_2011_7
About Molecule of the Month
The RCSB PDB Molecule of the Month by David S. Goodsell (The Scripps Research Institute and the RCSB PDB) presents short accounts on selected molecules from the Protein Data Bank. Each installment includes an introduction to the structure and function of the molecule, a discussion of the relevance of the molecule to human health and welfare, and suggestions for how visitors might view these structures and access further details.More