Our bodies create at least nine different forms of alcohol dehydrogenase, each with slightly different properties. Most of these are found primarily in the liver, including the beta3 form (PDB entry 1htb ) and the similar enzyme from horse liver (PDB entry 6adh ). The sigma form, available in PDB entry 1agn , is found in the lining of the stomach. Each enzyme is composed of two subunits, and quite remarkably, you can mix and match subunits between these different forms, creating mixed dimers that are still active. Ethanol is not the only target of these enzymes, they also make important modifications to retinol, steroids, and fatty acids. The range of different types of alcohol dehydrogenase ensures that there will always be one that is perfect for the current task.

Alcohol dehydrogenase provides a line of defense against a common toxin in our environment. But this protection carries with it some dangers. Alcohol dehydrogenase also modifies other alcohols, often producing dangerous products. For instance, methanol, which is commonly used to "denature" ethanol rendering it undrinkable, is converted into formaldehyde by alcohol dehydrogenase. The formaldehyde then does the damage, attacking proteins and embalming them. Small amounts of methanol cause blindness, as the sensitive proteins in the retina are attacked, and larger amounts, perhaps a glassful, lead to widespread damage and death.

Alcohol dehydrogenase also plays a central role in the most ancient business of biotechnology: alcoholic fermentation. Yeast and many bacteria build a larger alcohol dehydrogenase, like the one shown on the right (PDB entry 1ykf ). It performs the last step in the conversion of food into metabolic energy, creating ethanol instead of detoxifying it. Sugars are broken down and used for energy, forming ethanol as the waste product, which is excreted into liquid surrounding the cell. We have harnessed this process to produce alcoholic beverages: yeast is allowed to ferment grain sugars to form beer, and yeast is allowed to ferment grape juice to form wine. 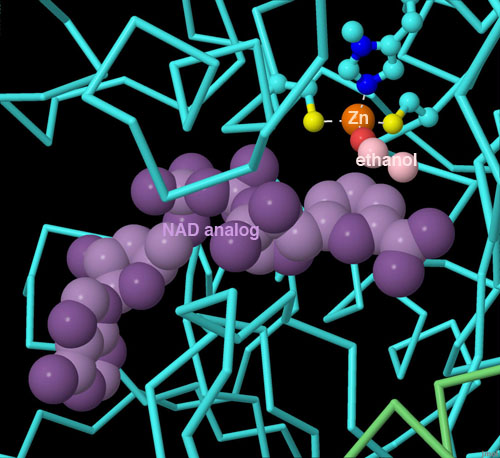 Alcohol dehydrogenase uses two molecular "tools" to perform its reaction on ethanol. The first is a zinc atom, which is used to hold and position the alcoholic group on ethanol. The second is a large NAD cofactor (constructed using the vitamin niacin), which actually performs the reaction. PDB entry 1adc , shown here, contains ethanol molecules bound to the two active sites. A slightly-modified version of NAD was used in the structure analysis, so that the enzyme would not immediately attack the ethanol. Notice how the zinc atom is cradled by three amino acids from the protein: cysteine 46 to the left, cysteine 174 to the right, and histidine 67 above. The ethanol binds to the zinc and is positioned next to the NAD cofactor, which extends below the ethanol molecule in this illustration. To explore this structure in more detail, click on the image for an interactive JSmol.

doi:10.2210/rcsb_pdb/mom_2001_1
About Molecule of the Month
The RCSB PDB Molecule of the Month by David S. Goodsell (The Scripps Research Institute and the RCSB PDB) presents short accounts on selected molecules from the Protein Data Bank. Each installment includes an introduction to the structure and function of the molecule, a discussion of the relevance of the molecule to human health and welfare, and suggestions for how visitors might view these structures and access further details.More