Molecule of the Month: Antifreeze Proteins 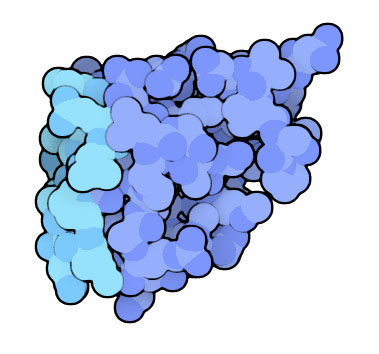 Antifreeze protein from the cold-water ocean pout, with the ice-binding portion in lighter blue.
Download high quality TIFF image
Ice is a big problem for organisms that live in cold climates. Once the temperature dips below freezing, ice crystals steadily grow and burst cells. This danger, however, has not limited the spread of life on Earth to temperate regions. Organisms of all types--plants, animals, fungi and bacteria--have developed ways to combat the deadly growth of ice crystals. In some cases, they pack their cells with small antifreeze compounds like sugars or glycerol. But in cases where extra help is needed, cells make specialized antifreeze proteins to protect themselves as the temperature drops.

Antifreeze proteins don't stop the growth of ice crystals, but they limit the growth to manageable sizes. For this reason, they are also known as ice-restructuring proteins. This is necessary because of an unusual property of ice called recrystallization. When water begins to freeze, many small crystals form, but then a few small crystals dominate and grow larger and larger, stealing water molecules from the surrounding small crystals. Antifreeze proteins counteract this recrystallization effect. They bind to the surface of the small ice crystals and slow or prevent the growth into larger dangerous crystals.

Many Solutions to the Same Problem

Antifreeze proteins are a perfect example of convergent evolution. Looking at the proteins used by different organisms, we see that many different proteins have been selected to serve this same function. Several examples are included here. All of these are small proteins with a flat surface that is rich in threonine (colored lighter blue here), which binds to the surface of ice crystals. These include two proteins from fish, the ocean pout (1kdf ) and the winter flounder (1wfb ), and three very active proteins from insects, the yellow mealworm beetle (1ezg ), the spruce budworm moth (1eww ), and the snow flea (2pne ). 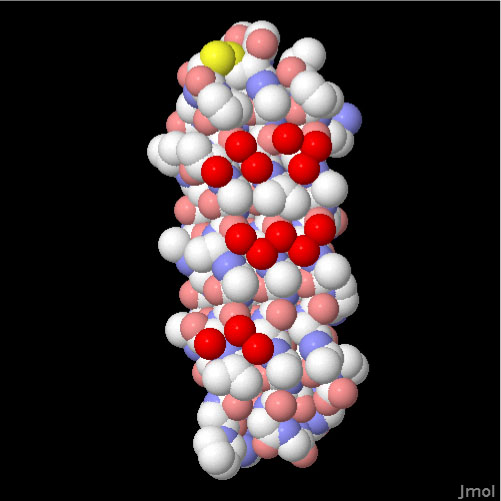 doi:10.2210/rcsb_pdb/mom_2009_12
About Molecule of the Month
The RCSB PDB Molecule of the Month by David S. Goodsell (The Scripps Research Institute and the RCSB PDB) presents short accounts on selected molecules from the Protein Data Bank. Each installment includes an introduction to the structure and function of the molecule, a discussion of the relevance of the molecule to human health and welfare, and suggestions for how visitors might view these structures and access further details.More