Insulin receptors are proteins found on the surfaces of most cells in the human body. Insulin binding activates it and triggers a signaling cascade inside the cell, resulting in glucose uptake and various other metabolic and growth-related functions. The insulin receptor binds to several US FDA approved designer insulins, such as:

The insulin receptor (IR) is a large, multi-domain, integral membrane protein with both extracellular and intracellular domains. Domains positioned outside the cell bind insulin and activate the tyrosine kinase (Tyr-K) catalytic domain located within the cell. The Tyr-K, in turn, activates various other proteins in a signaling cascade leading to insulin’s various functions (Siddle 2011). Key steps in insulin signaling, as shown in Figure 1, include:

Following entry into cells (e.g., facilitated by GLUT4) the glucose is either metabolized for energy, converted to glycogen for storage, stored as triglycerides, and/or used for cell growth processes. 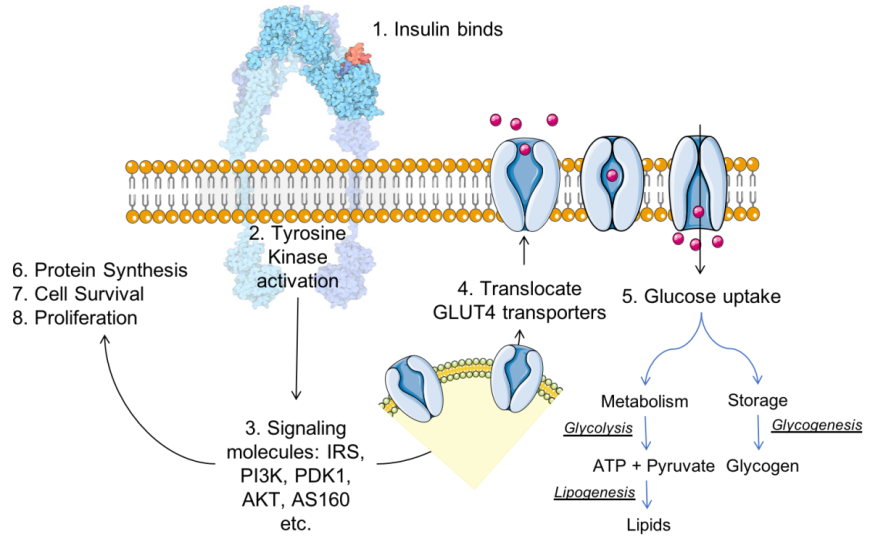 The insulin receptor (IR) is produced as a single polypeptide chain (the IR gene product), folded and cross-linked via disulfide bridges in the endoplasmic reticulum, and cleaved in the Golgi to form two chains (IR α and β chains, http://www.uniprot.org/uniprot/P06213). Starting from the N-terminus, the IR protein includes two Leu rich domains (L1 and L2), separated by one Cys rich region (CR) domain, and followed by three fibronectin-III domains (Fn III 1, 2, and 3). The Fn III-2 domain is interrupted by a short insert domains (ID) within which protein is cleaved into two chains, designated α and β (Figure 2a). Following the Fn III-3 domain, the IR has a transmembrane, tyrosine kinase, and C-terminal tail domains (Figure 2a). 3D structures of these domains are shown in Figures 2b, 3a, and 3b. 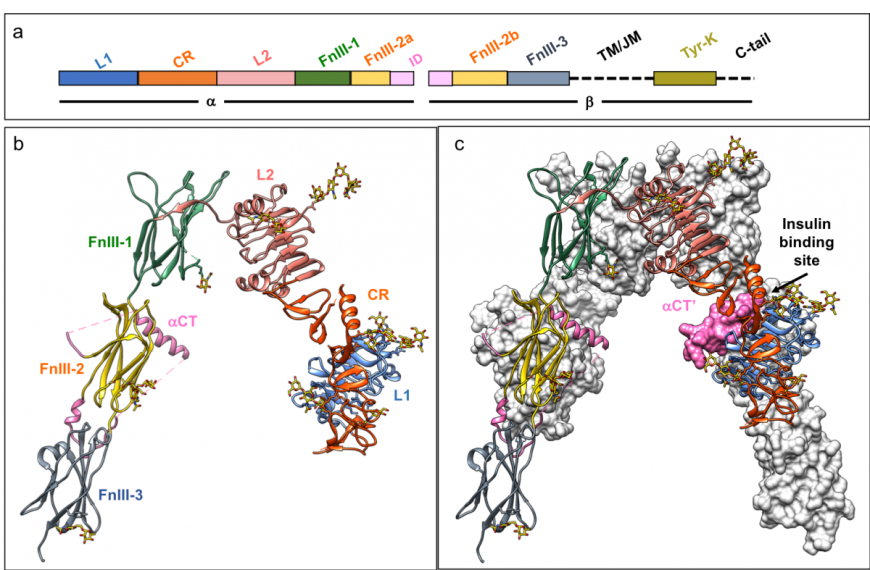 The IR α-chain is entirely extracellular. When compared to other tyrosine kinase receptor proteins, the first three domains of the α-chain (i.e., L1, CR, and L2 domains) are unique to IR (Lou et al., 2006). The L1 and L2 domains are similar in architecture, each consisting of three β-sheets and some helices forming a triangular prism-like shape. The L1 domain plays a key role in insulin binding. The more extended CR domain includes a single helix on one side of a series of small antiparallel sheets. The three Fn domains are β-sandwiches, wherein one face of the sandwich has three strands and the other has four strands. A short helix at the C-terminus of the IR α-chain ID domain (called α-CT) plays a critical role in insulin binding. X-ray crystal structures suggest that the α-CT helix of one molecule binds to other insulin receptor molecule at the insulin binding site (Figure 2c). 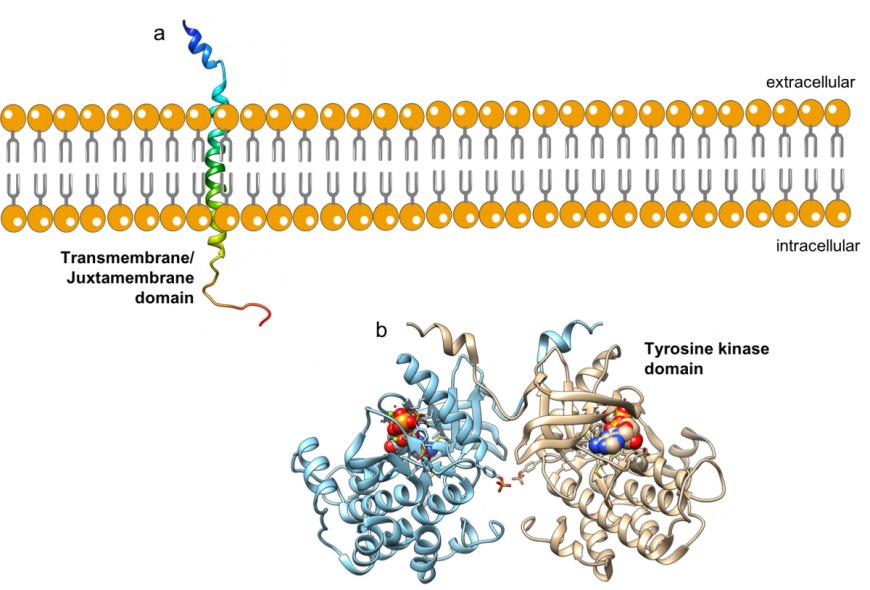 The IR β-chain has two extracellular domains (ID and FN III - 3), a single helical transmembrane domain (Figure 3a, Li et al., 2014), an intracellular domain tyrosine kinase catalytic domain (or Tyr-K) and a C-terminal tail (Figure 3b, Croll et al., 2016). The architecture of the IR allows insulin binding on the outside of cells to activate the Tyr-K domain.

At the cell surface, two copies of the IR protein (including chains α and β) form a tetrameric assembly and are covalently linked through intra-monomer (between the α and β chains) and inter-IR disulfide bridges. Interestingly, differential splicing of exon 11 insulin receptor gene yields two different isoforms of insulin receptor – a long version, IR-B (as described above), and a short version IR-A (with 12 amino acids missing at the C-terminus of the α chain). The abundance of IR-A and IR-B isoforms is tissue specific and can be regulated during development and cell differentiation.

Two key aspects of IR function are discussed in the following sections – a. insulin binding (outside the cell), and b. Tyr-K activation (inside the cell).

Both insulin and the IR, consist of two chains. Insulin forms dimers and hexamers, while the receptor forms homodimers on the cell surface. In the past four decades efforts have focused on understanding how many copies of the insulin monomer are required to activate the homodimeric IR. Although the IR dimer can potentially bind two insulin molecules (see Figure 2c), negative cooperativity in the IR results in one insulin monomer binding to the dimeric receptor with high affinity (reviewed in De Meyts 2016), while any additional insulin binding is of lower affinity.

Monomeric insulin occupies one of the insulin binding sites (near domains L1, Fn III- 1, and α-CT). Since the IR structure is large and complex, a truncated, yet functional, version of the receptor was designed (Menting et al., 2013) for use in mechanistic studies. The truncated form of IR includes only those domains that participate in hormone binding (i.e., L1, CR, L2, Fn III-1, and α-CT). Structural studies of complexes of this truncated receptor with insulin revealed how insulin sits atop the L1 domain and interacts with the α-CT helix (Figure 4).  Complex formation involves movement of the C-terminal strand of the insulin B chain to expose amino acids critical for IR binding and to accommodate α-CT helix binding (Figure 4). 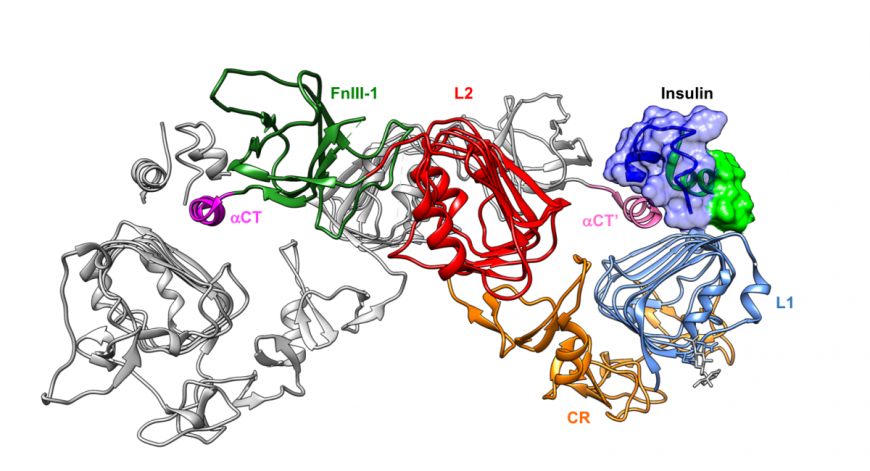 Figure 4: Complex of insulin and a truncated version of the insulin receptor shown in ribbon representation (PDB ID 5kqv, Menting et al., 2013). The L1, CR, L2, FN III-1 and α-CT are color coded to display their locations in this complex. The insulin molecule is colored in blue and green and its surface is drawn for easy identification. A second chain of the truncated IR protein is shown in ribbon representation and colored grey (except for the α-CT’ helix).

Closer examination of the intermolecular interactions between insulin, L1, and the α-CT domains show that hormone binding is stabilized by several non-covalent interactions including a few hydrogen bonds. Insulin binds IR through van der waals interactions with Site 1 (Fig 5), while insulin dimer and hexamer formation involves the opposite face of the hormone (Site 2, in Figure 5). 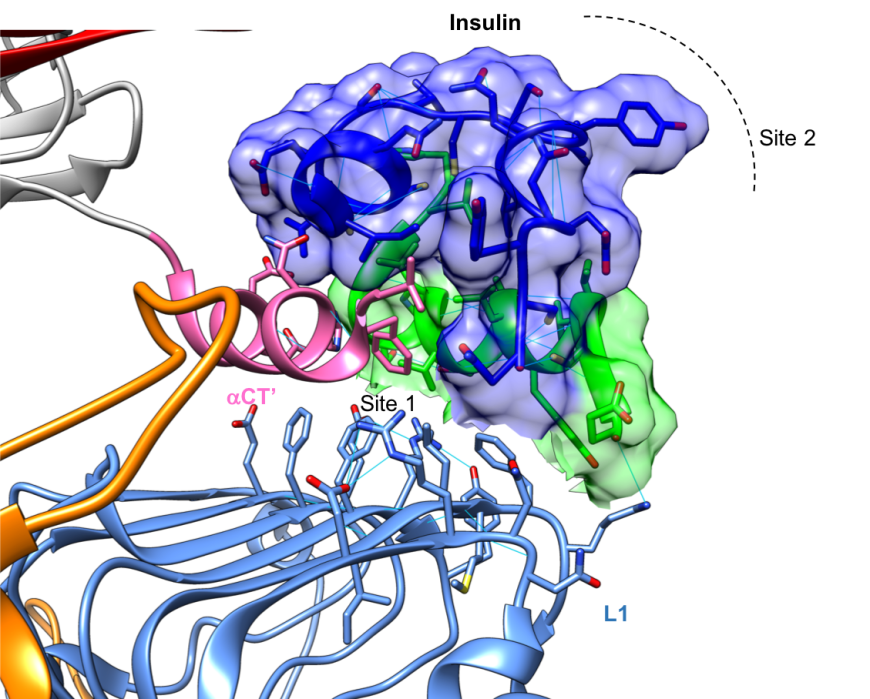 Figure 5: Close up of the complex of insulin, shown in surface representation, and a truncated version of the insulin receptor, shown in ribbon representation, (PDB ID 5kqv, Menting et al., 2013). The L1, CR, and α-CT’ are color coded to display their locations in this complex. The insulin molecule is colored in blue and green and its surface is drawn for easy identification. Hydrogen bonds stabilizing each of the domains are shown as thin blue lines.

Although crystal structures of the soluble IR ectodomain bound to insulin show both insulin binding sites occupied, recent cryo-electron microscopy studies reveal that dimers of full length IRs can bind either one or two insulin molecules (Scaping et al., 2018). Conformational changes induced in the IR dimer following insulin binding are thought to propagate across the cell membrane and activate the intracellular Tyr-K domains leading to trans-autophosphorylation of the both IRs and initiation of the signaling cascade. The precise order of these conformational changes in the various domains of IR and molecular details of this process remain active areas of investigation.

The IR Tyr-K domain has an N-terminal lobe composed of a β-sheet and a single helix, and a C-terminal lobe composed of several α-helices (Figure 6). The kinase active site is located in the hinge region between the two lobes, where both the substrate to be phosphorylated (Tyr residue) and the phosphate group donor (cofactor ATP) must bind. In its inactive state, substrate and cofactor access to the enzyme active site is blocked by an activation loop spanning residues 1149-1170 of the protein chain. 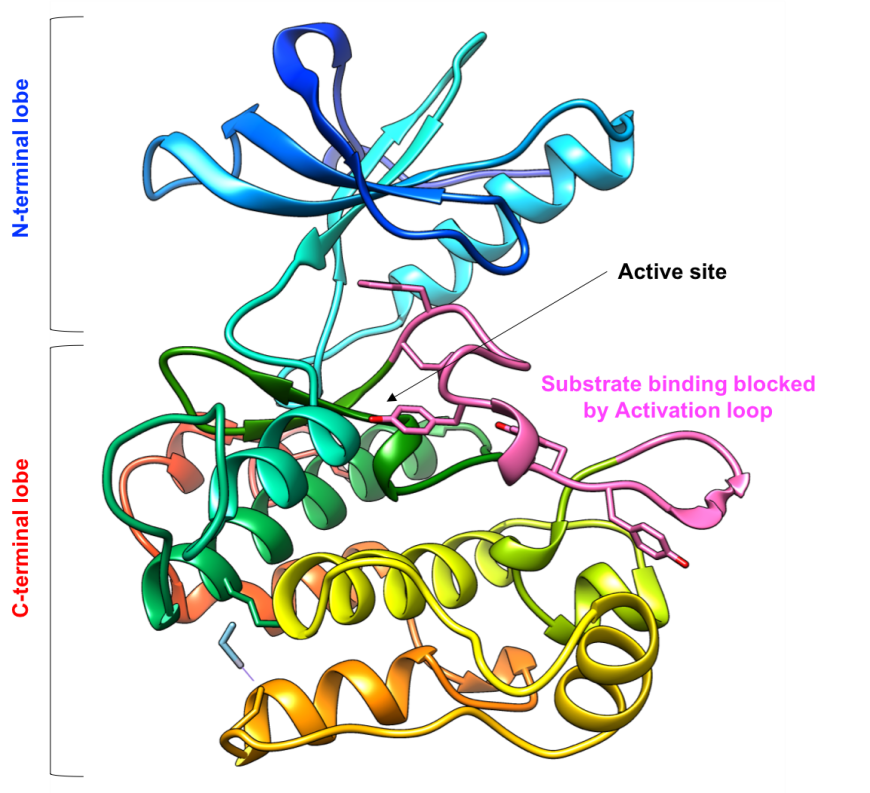 Following insulin engagement with the IR, conformational changes in the extracellular domains are transmitted to the intracellular domains and three tyrosine residues (Tyr1158, Tyr1162, and Tyr1163) in the activation loop of the Tyr-K domain are phosphorylated, rendering the enzyme active (Figure 7). With the charged phospho-tyrosine residues becoming exposed to the solvent the Tyr-K active site is now open to bind the enzyme substrate (proteins/peptides with a Tyr to be phosphorylated) and cofactor (ATP, to donate the phosphate group). The activation loop also includes the invariant DFG sequence (Asp1050, Phe1051, and Gly1052). As a result of Tyr-K activation, the amino acid side-chains are positioned towards the enzyme core (also referred to as the DFG-in conformation) and Asp1050 coordinates the Mg atoms bound to the cofactor, in preparation for kinase activity. The catalytic residues (1130-1137) are positioned to phosphorylate the Tyr residue in the substrate (Figure 7 inset) and the N-lobe helix also rotates towards the C-lobe, to stabilize the active site conformation. 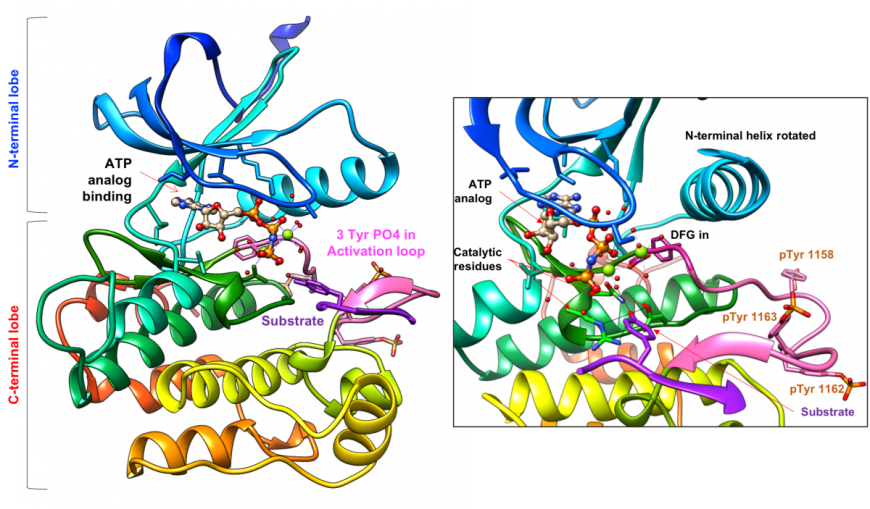 The IR dimer places two Tyr-K domains in close vicinity. A recent study explored whether the two kinase domains function independently or cooperatively (Cabail, et al., 2015). X-ray crystallographic studies suggest that the juxtamembrane regions in the IR β-chains are swapped so that these domains may trans-activate each other (Figure 3b).

Various population studies, such as the Epidemiology of Diabetes Interventions and Complications (EDIC, 1999) and UK Prospective Diabetes Study (UKPDS, King et al., 2001), have shown that in individuals with either type 1 or type 2 diabetes, complications arising from damage to small blood vessels is best avoided/delayed by maintaining normal blood glucose levels (i.e., within a narrow range, normoglycemia). Individuals who are unable to produce insulin (e.g., due to Type-1 diabetes, or damage to insulin producing β-cells resulting from injury or other disease), need exogenous insulin to facilitate glucose uptake in cells (Boli, 2001). Individuals with advanced Type-2 diabetes often have β-cell fatigue leading to little or no insulin production. Here too, exogenous insulin can help manage the blood glucose levels.

To achieve normoglycemia, administered insulin must eliminate blood glucose spikes following meals, in the same manner as physiological release of insulin in response to high blood glucose levels after eating. Additionally, the exogenous insulin must also be able to keep the blood glucose levels steady between meals (especially at night, when the individual is sleeping), as is done by the basal levels of insulin acting throughout the day and night. Designer insulin (link to layer 1) molecules have been developed to function as rapid-acting or long-acting insulins and regulate blood glucose levels over varying lengths of time. Frequently individuals with diabetes are prescribed combinations of these insulins for managing diabetes.

Successful insulin-based therapies depend on the presence of functional IRs. Experience has shown that insulin management of diabetes does not always produce the desired outcome. For example, if the insulin receptor and/or one or more of the signaling proteins downstream of IR are not fully functional, insulin injections may not control blood glucose levels. In such cases other pharmacological approaches are required.

Insulin is not the only hormone that binds to and signals via the IR. In addition to its best known natural ligand (insulin), the IR can bind insulin-like growth factors (IGF-1 and IGF-2), at high concentrations. For example, the IR-A has a higher affinity for IGF2, and hybrid receptors formed by IR-B and IGF-1R, are activated by IGF-1 (Pandini et al., 2002). Conversely, insulin can also bind the receptors for IGF-1 and 2, at high concentrations, leading to mitogenic effects (Varewijck and Janssen, 2012).