Geis uses a thin ball and stick representation of a section of A-DNA, the more compact conformation of DNA less often seen in biological systems. He draws it from a perspective looking down into the double helix, showing the increase in diameter of the middle of the helix from the B form DNA. 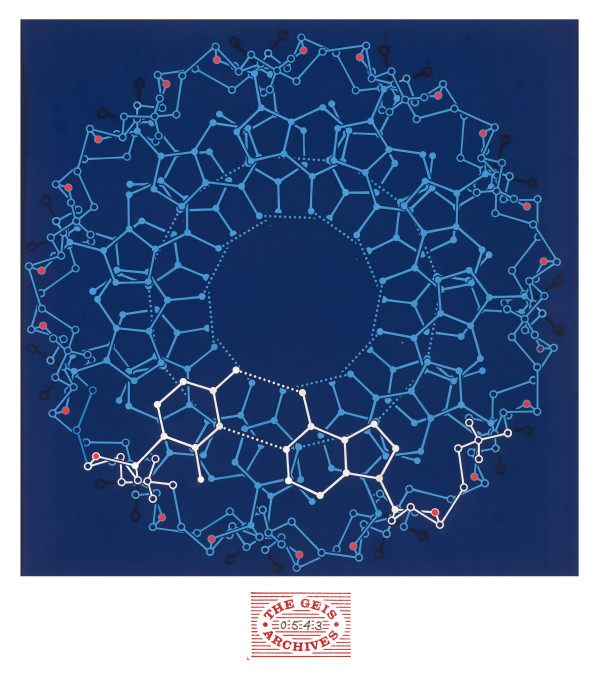 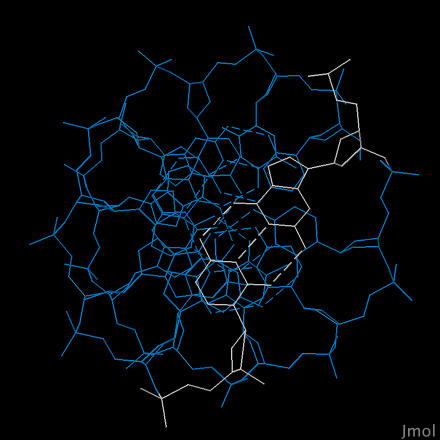 Deoxyribonucleic acid (DNA) is responsible for storing genetic information and contains all of the information that an organism needs to develop, grow, and survive. The DNA of an offspring contains information from the parent generation. The DNA A-helix exists under dehydrated conditions (Goodsell, 2001). It is right-handed and consists of 11 base pairs per turn ("B-Form, A-Form, Z-Form of DNA" website). In comparison to the B-helix (most common form of DNA), it has tipped bases and a deep major groove (Goodsell, 2001).

DNA is a chain of nucleotides, which are each composed of a deoxyribose, a phosphate group, and a base (adenine, thymine, guanine, or cytosine). The structure of DNA is a double-helix and base-pairing occurs between adenine and thymine and between guanine and cytosine (according to Chargaff’s rules). Adenine/thymine base-pairing consists of two hydrogen bonds and guanine/cytosine base-pairing consists of three hydrogen bonds. The sugar-phosphate backbone is closer in some portions of DNA.