Molecule of the Month: Luciferase

Organisms from fireflies to bacteria use luciferase to emit light 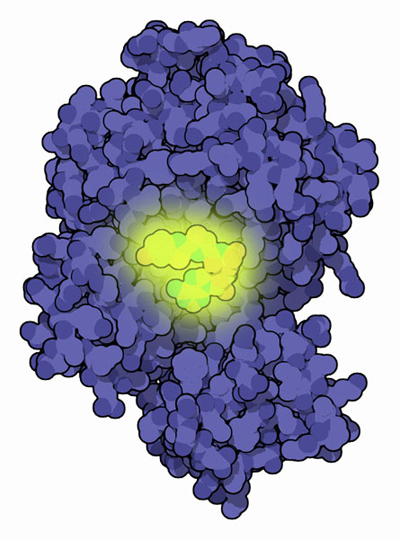 Firefly luciferase with the chromophore in yellow.
Download high quality TIFF image
Do you remember the first time that you saw a firefly? If you live anywhere between the Rocky Mountains and the east coast of the US, you have probably chased fireflies since you were a child. If you live in other parts of the world, like me, you may have had the pleasure of discovering fireflies during a summer vacation. They are one of the delightful wonders of warm summer evenings.

The cool yellowish light of fireflies is created by the enzyme luciferase, shown here from PDB entry 2d1s . The creation of light is not an easy process. It requires a lot of energy—a single photon of green light requires about the same energy as the breaking of eight ATP molecules. So, luciferase uses a very energetic process to create light. It has a cofactor, termed a luciferin, that forms a highly strained complex with oxygen, using an ATP molecule to help set everything up. When this oxygenated luciferin breaks, forming carbon dioxide in the process, it leaves behind a highly excited form that then emits the light.

Since the light-emitting reaction of luciferase is self-contained, needing only oxygen and ATP, clever researchers have used it as a tool in scientific research. It can be used inside cells as a sensor that reports the amount of ATP - if it is glowing, there must be ATP around. Luciferase has also been attached to other proteins to watch where they are in living organisms. The light is often too dim to follow in individual cells, but it has been used to label large collections of cancer cells. By watching for glowing cells, researchers follow a cancer as it grows and metastasizes, and test new anticancer therapies to see if they stop its growth. 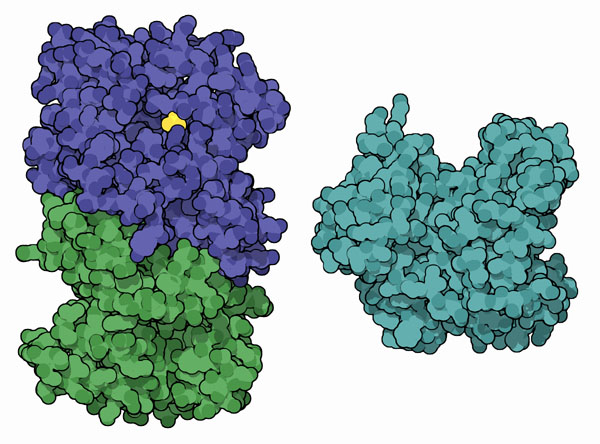 Glow in the Dark

The chemical trick of bioluminescence has been discovered dozens of times during the evolution of life, by bacteria, by fungi, by sea anemones, by dinoflagellates, and, of course, by fireflies. In each case, there is a luciferase protein that uses a luciferin cofactor to trap oxygen. The proteins are all very different, and the luciferins come in all shapes and sizes, indicating that they have all separately evolved to perform the same function. Two examples are shown here. The one on the left is from a bacterium (PDB entry 1brl ) and the one on the right is from a dinoflagellate that is responsible for the greenish glow seen in breaking waves (PDB entry 1vpr ). Note that both of these structures include only the luciferase protein, and are missing their luciferin cofactors.

For more information on luciferase from a genomics perspective, take a look at the Protein of the Month at the European Bioinformatics Institute. The color of light that is emitted by luciferase is highly dependent on the amino acids that surround the luciferin. PDB entry 2d1s (on the left) is the structure of luciferase from a Japanese firefly. It normally emits a greenish-yellow light. But if you change one amino acid from a serine to an asparagine, the color changes to red, as seen in PDB entry 2d1t (on the right). Surprisingly, this change is a fair distance from the luciferin, and the color change is thought to be caused by slight changes in the packing of amino acids and a change in the flexibility around the luciferin.

doi:10.2210/rcsb_pdb/mom_2006_6
About Molecule of the Month
The RCSB PDB Molecule of the Month by David S. Goodsell (The Scripps Research Institute and the RCSB PDB) presents short accounts on selected molecules from the Protein Data Bank. Each installment includes an introduction to the structure and function of the molecule, a discussion of the relevance of the molecule to human health and welfare, and suggestions for how visitors might view these structures and access further details.More