Molecule of the Month: Catalase

Catalase, with the heme in red and the central iron in green.
Download high quality TIFF image
Living with oxygen is dangerous. We rely on oxygen to power our cells, but oxygen is a reactive molecule that can cause serious problems if not carefully controlled. One of the dangers of oxygen is that it is easily converted into other reactive compounds. Inside our cells, electrons are continually shuttled from site to site by carrier molecules, such as carriers derived from riboflavin and niacin. If oxygen runs into one of these carrier molecules, the electron may be accidentally transferred to it. This converts oxygen into dangerous compounds such as superoxide radicals and hydrogen peroxide, which can attack the delicate sulfur atoms and metal ions in proteins. To make things even worse, free iron ions in the cell occasionally convert hydrogen peroxide into hydroxyl radicals. These deadly molecules attack and mutate DNA. One theory, still controversial, is that this type of oxidative damage accumulates over the years of our life, causing us to age.

Antioxidants to the Rescue

Fortunately, cells make a variety of antioxidant enzymes to fight the dangerous side-effects of life with oxygen. Two important players are superoxide dismutase, which converts superoxide radicals into hydrogen peroxide, and catalase, which converts hydrogen peroxide into water and oxygen gas. The importance of these enzymes is demonstrated by their prevalence, ranging from about 0.1% of the protein in an Escherichia coli cell to upwards of a quarter of the protein in susceptible cell types. These many catalase molecules patrol the cell, counteracting the steady production of hydrogen peroxide and keeping it at a safe level.

Catalases are some of the most efficient enzymes found in cells. Each catalase molecule can decompose millions of hydrogen peroxide molecules every second. The cow catalase shown here (PDB entry 8cat ) and our own catalases use an iron ion to assist in this speedy reaction. The enzyme is composed of four identical subunits, each with its own active site buried deep inside. The iron ion, shown in green, is gripped at the center of a disk-shaped heme group. Catalases, since they must fight against reactive molecules, are also unusually stable enzymes. Notice how the four chains interweave, locking the entire complex into the proper shape.

Different cells build different types of catalase. Many are available for study in the PDB. The catalase that protects our red blood cells, shown on the left from PDB entry 1qqw , is composed of four identical subunits and uses a heme/iron group to perform the reaction. Many bacteria scavenge hydrogen peroxide with a larger catalase, shown in the center from PDB entry 1iph , that uses a similar arrangement of iron and heme. Other bacteria protect themselves with an entirely different catalase that uses manganese ions instead of heme, as shown at the right from PDB entry 1jku . For more information on catalases from a genomic perspective, take a look at the Protein of the Month at the European Bioinformatics Institute. 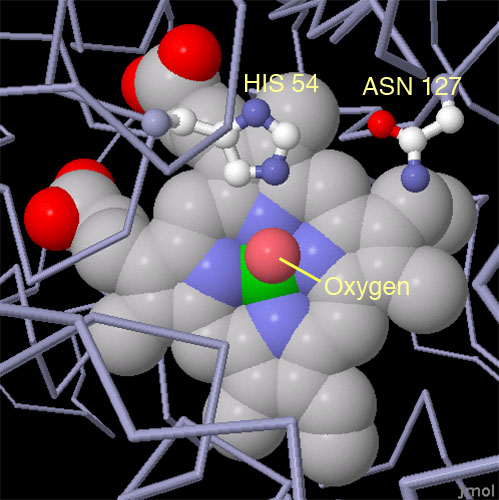 doi:10.2210/rcsb_pdb/mom_2004_9
About Molecule of the Month
The RCSB PDB Molecule of the Month by David S. Goodsell (The Scripps Research Institute and the RCSB PDB) presents short accounts on selected molecules from the Protein Data Bank. Each installment includes an introduction to the structure and function of the molecule, a discussion of the relevance of the molecule to human health and welfare, and suggestions for how visitors might view these structures and access further details.More