Molecule of the Month: Ferritin and Transferrin

Ferritin and transferrin manage our essential stores of iron ions

Ferritin exterior and interior cross section.
Download high quality TIFF image
Iron is found everywhere on the Earth, so it is no surprise that living cells use iron ions in many ways. We use iron throughout our body, for many tasks. Iron ions bind strongly and specifically to small molecules such as oxygen, making it an essential tool for manipulating these elusive molecules. Iron ions also cycle easily between the ferrous and ferric forms, providing a handy tool for manipulating individual electrons. Iron ions, however, pose a great challenge in our modern biological environment. The water filling cells and the oxygen in the air together conspire to convert iron ions to the ferric state, which is highly insoluble, forming rust-like oxides. The cell must somehow shelter iron ions so that they may be stored and delivered in the necessary quantities. This is the job of ferritin and transferrin.

Inside cells, extra iron ions are locked safely in the protein shell of ferritin, shown here from PDB entry 1fha . Ferritin is composed of 24 identical protein subunits that form a hollow shell. The bottom illustration shows the hollow shell cut in half, showing the chamber inside and a few of the pores that lead inside the shell. After entering the ferritin shell, iron ions are converted into the ferric state, where they form small crystallites along with phosphate and hydroxide ions. There is room to pack about 4500 iron ions inside.

We have about 3.7 grams of iron in our body, painstakingly gathered from iron in our diet. About 2.5 grams are locked inside the hemoglobin in our blood, where they assist in the transport of oxygen. This is a valuable and essential resource, so special mechanisms for the recycling of this iron have been developed. Another few tenths of a gram are found in myoglobin, which also assists in oxygen management. A remarkably small amount--about 0.02 g--is distributed between the many different proteins that transfer electrons, such as the proteins of the electron transport chain that create most of our cellular ATP supplies. The rest, about a gram, is stored inside ferritin to fulfill future needs.

Transferrin and transferrin receptor. The portion crossing the membrane, which is not included in the structure, is shown schematically.
Download high quality TIFF image

Iron ions are delivered in the blood by the protein transferrin, shown here at the top in blue from PDB entry 1h76 . Each transferrin molecule can carry two iron ions, shown here in brown, with each ion coupled with a carbonate ion, shown in red and white. The protein contains an array of amino acids that are perfectly arranged to form four bonds to the iron ion, which locks it in place. Once it finds its iron atoms, transferrin flows through the blood until it finds a transferrin receptor on the surface of a cell, shown here at the bottom from PDB entry 1cx8 (that PDB file contains coordinates for the part of the receptor that is outside the cell--the rest is shown as a schematic here). Transferrin binds tightly to the receptor and is drawn into the cell in a small vesicle. The cell then acidifies the inside of this little pocket, which causes transferrin to release its iron. Then, the receptor and empty transferrin are recycled back to the outside of the cell. Triggered by the neutral pH of the blood, the receptor releases the empty transferrin, and it continues its job of gathering iron.

If you look through the PDB, you will find several molecules called lactoferrin and ovotransferrin that are similar to transferrin. These molecules, found in milk and egg whites respectively, also have strong binding sites for iron. However, their main function is not delivery. Instead, they serve to protect cells from bacteria. Since they mop up any free iron ions, they starve bacteria of a vital resource, slowing the growth of an infection. 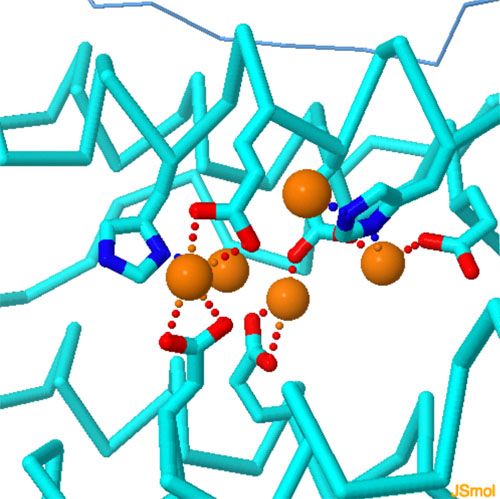 Three structures (PDB entry 4lqh, 4lpj, 4lyu) follow ferritin as it starts to fill with iron. The researchers soaked ferritin in a solution of iron and determined structures at different times. The one shown here was obtained after soaking for 15 minutes, and contains five iron ions bound to each subunit, coordinated by a "nanocage" of acidic and histidine amino acids. This site is also thought to be where the iron ions are converted to the safer ferric state before storage. To compare this to structures before the soak (with no iron ions), or after a one minute soak (with only one iron ion), click on the image for an interactive JSmol.

doi:10.2210/rcsb_pdb/mom_2002_11
About Molecule of the Month
The RCSB PDB Molecule of the Month by David S. Goodsell (The Scripps Research Institute and the RCSB PDB) presents short accounts on selected molecules from the Protein Data Bank. Each installment includes an introduction to the structure and function of the molecule, a discussion of the relevance of the molecule to human health and welfare, and suggestions for how visitors might view these structures and access further details.More