A modular approach to chemistry simplifies the construction of complex protein-targeting molecules. 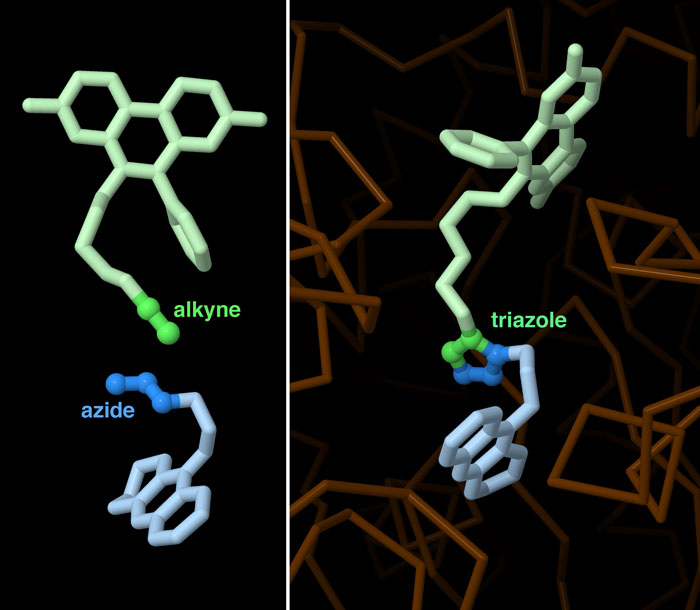 The two precursor molecules at left bind to neighboring subsites in the enzyme acetylcholinesterase. This places them in the proper orientation to click together into a powerful inhibitor, as seen at right.
Download high quality TIFF image
By understanding the structure of proteins and nucleic acids, we gain the ability to control them, by blocking them with inhibitors or modifying them with non-natural chemical groups. This is the basis of structure-guided drug discovery, which has led to the discovery of many important therapeutics in current use. One of the great challenges, however, is that biomolecules have complex shapes and the molecules that bind to them need to have similarly unusual geometries. This year, the Nobel Prize in Chemistry was awarded to three researchers who spearheaded a modular approach to chemistry that helps researchers synthesize diverse molecules with desired shapes and properties.

Click chemistry allows researchers to build custom molecules by connecting modular precursors. The trick to making these connections is to find chemical groups that are normally unreactive, but can be "clicked" together under the right conditions. The Sharpless and Mendal laboratories independently discovered that compounds with an azide group could be connected to compounds with an alkyne group using copper as a catalyst. When they react, these two chemical groups form a characteristic five-membered triazole ring connecting the two molecules.

Amazingly, the Sharpless lab showed that an enzyme could perform this same reaction without the need for copper. The two molecules both bind to the protein, bringing the azide and alkyne groups in close proximity and promoting reaction. In their classic experiment, they added many pairs of precursors with azide or alkyne groups to the enzyme acetylcholinesterase, and found that the enzyme connected only the best one. Using this approach, the enzyme created an inhibitor that binds more tightly than any other previously known non-covalent inhibitor, as seen in the compound shown here from PDB ID 1q83. Reactions like this are also being performed inside living cells, to connect probes and sensors to cellular proteins. The Bertozzi lab has developed a collection of cell-friendly click reactions, for example, by removing the need for toxic copper catalysts by embedding the alkyne inside a strained molecular ring. 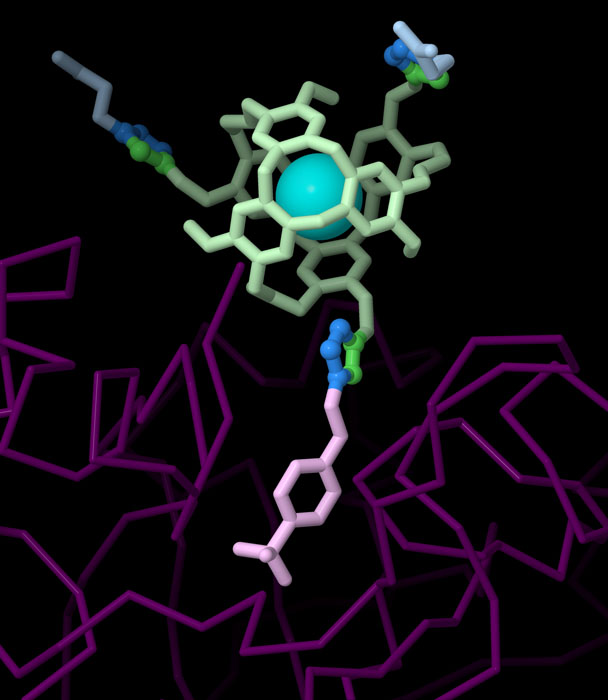 A biosensor created by clicking together a cryptophane molecule that traps xenon (in green) to a molecule that binds specifically to the enzyme carbonic anhydrase II (magenta). Two additional substituents are also added to the cryptophane by click chemistry near the top.
Download high quality TIFF image

Click chemistry has become a central tool in the synthetic chemistry toolbox. It is widely used for combinatorial chemistry, where many modular components are connected in multiple configurations and all rapidly tested for potency. It is also being used in a targeted way, allowing researchers to make their molecular dreams a reality. The molecule shown here (PDB ID 3cyu) is designed to be a biosensor. The spherical cryptophane at the top, which has the alkyne half of the click reaction, traps a xenon atom that may be useful as a contrast agent for MRI. The azide portion shown at the bottom is a molecule that binds specifically to the target enzyme: carbonic anhydrase II. 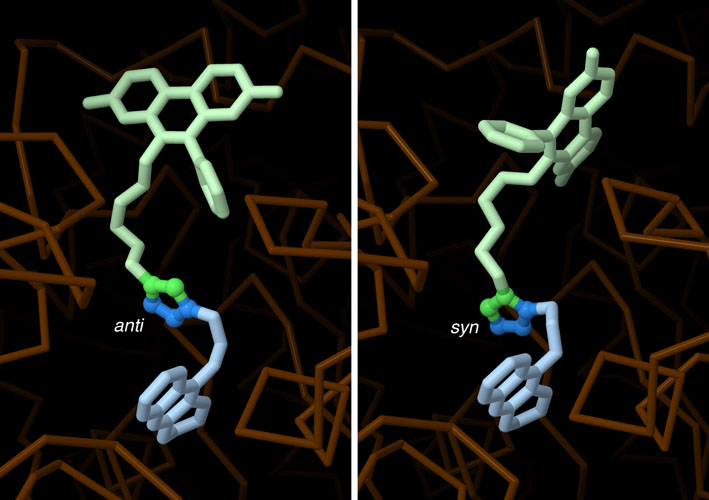 Click chemistry between azide and alkyne precursors can generate two slightly different triazoles, anti and syn, depending on how they line up next to each other during the reaction. When catalyzed by copper, most of the triazoles have the anti configuration, with the two connected precursors extending in opposite directions from the five-membered ring (PDB ID 1q84). However, in the acetylcholinesterase-catalyzed reaction described above, the precursors mostly align side-by-side to form the syn triazole (PDB ID 1q83). As expected, biochemical testing showed that this syn compound binds more tightly to the enzyme than the anti compound. To explore these two structures in more detail, click on the image for an interactive JSmol.

doi:10.2210/rcsb_pdb/mom_2022_12
About Molecule of the Month
The RCSB PDB Molecule of the Month by David S. Goodsell (The Scripps Research Institute and the RCSB PDB) presents short accounts on selected molecules from the Protein Data Bank. Each installment includes an introduction to the structure and function of the molecule, a discussion of the relevance of the molecule to human health and welfare, and suggestions for how visitors might view these structures and access further details.More