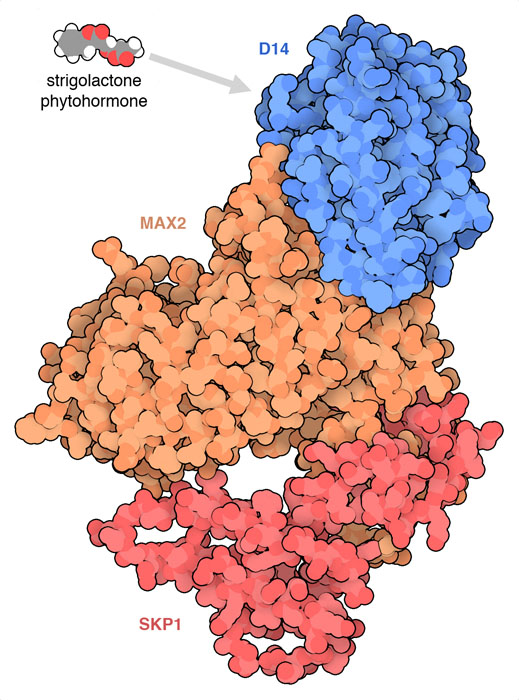 Complex of activated D14 with a MAX2 protein and a SKP1 protein. Note that in different organisms, these proteins have different names, so in this PDB entry, the MAX2-type protein is called D3 and the SKP1-type protein is called SKP1A or ASK1.
Download high quality TIFF image
Many hormones deliver their signals by binding to receptors on cell surfaces, launching a cascade of signaling enzymes inside the cell. Familiar examples include insulin and glucagon, the hormones that help regulate blood sugar. Steroid hormones like estrogen and testosterone travel inside a cell and bind to receptor proteins, which then bind to DNA and regulate gene expression. Some of the phytohormones used by plants have an entirely different mode of action. These phytohormones bind to an enzyme in the cell, which then activates the ubiquitin/proteasome system, regulating key proteins involved in growth by destroying them.

Strigolactones are small molecules synthesized in plant cells from carotenoids. They bind to a receptor called DWARF14 (D14 for short), so named because mutations in the gene produce smaller plants with more branching. D14 is an enzyme that breaks strigolactones into pieces. In the process, one piece remains attached to the enzyme, blocking its enzymatic action but activating it as a receptor (see the Jmol interactive below). The activated D14 then binds to the MAX2 protein, which then binds to a subunit of the ubiquitination machinery, SKP1. Ultimately, this will create an active ubiquitination complex that will proceed to degrade the relevant regulatory proteins.

PDB ID 5hzg captures the process after strigolactone has been bound and cleaved, and the MAX2 and SKP1 proteins have been bound. The result is a large complex poised to bring together the ubiquitination machinery and proteins that are its targets. D14 may also be a one-shot enzyme. Once it cleaves a strigolactone molecule and builds this complex, it may no longer be effective as an enzyme and will itself be degraded after it’s finished delivering its messages. 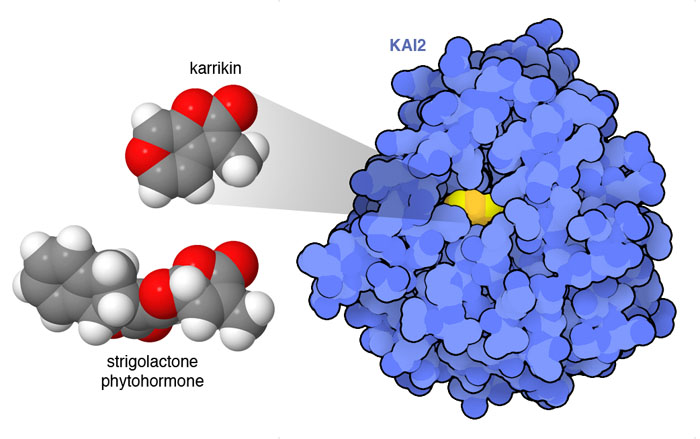 Rise from the Ashes

Compounds created during forest fires act as plant growth regulators in a similar way. Karrikins are formed by the burning of cellulose and sugars, and fall to the ground in smoke particles. Later, they are washed into the soil by rain, they enter buried seeds, and bind to a receptor called KAI2. This receptor helps control the germination of seeds, so binding of karrikins can help spur sprouting of new plants after an area is burned. As shown in the figure, karrikins are similar to one end of the larger strigolactone phytohormones, and mimic the portion that ends up being covalently connected to the receptor. KAI2 is very similar to D14, and is shown here from PDB ID 4jym. 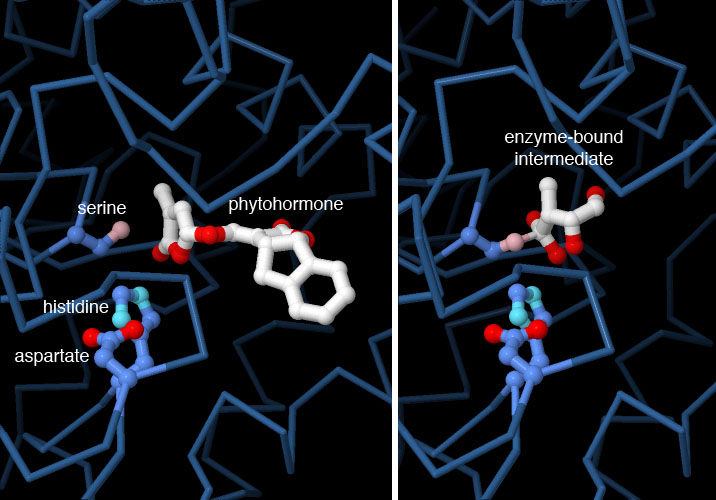 D14 uses a classic catalytic triad of serine-histidine-aspartate amino acids to perform its cleavage reaction, similar to the triad found in serine proteases. Structures have been determined for several steps in the process. Three structures are included in this interactive JSmol: PDB entry 3w04 (not shown in the illustration) is the enzyme alone, PDB entry 5dj5 has a phytohormone bound in the active site, and PDB entry 4iha captures the enzyme after cleavage with part of the phytohormone covalently connected to the serine. To explore these structures in more detail, click on the image for an interactive version.

doi:10.2210/rcsb_pdb/mom_2022_10
About Molecule of the Month
The RCSB PDB Molecule of the Month by David S. Goodsell (The Scripps Research Institute and the RCSB PDB) presents short accounts on selected molecules from the Protein Data Bank. Each installment includes an introduction to the structure and function of the molecule, a discussion of the relevance of the molecule to human health and welfare, and suggestions for how visitors might view these structures and access further details.More