Pyruvate kinases are the paradoxical gatekeepers for cancer cell metabolism and growth.

This article was written and illustrated by Faiza Ahmed, Jonathan Ash, Thirth Patel, and Auriel Sanders as part of a week-long boot camp for undergraduate and graduate students hosted by the Rutgers Institute for Quantitative Biomedicine. The article is presented as part of the 2022-2023 PDB-101 health focus on “Cancer Biology and Therapeutics.” 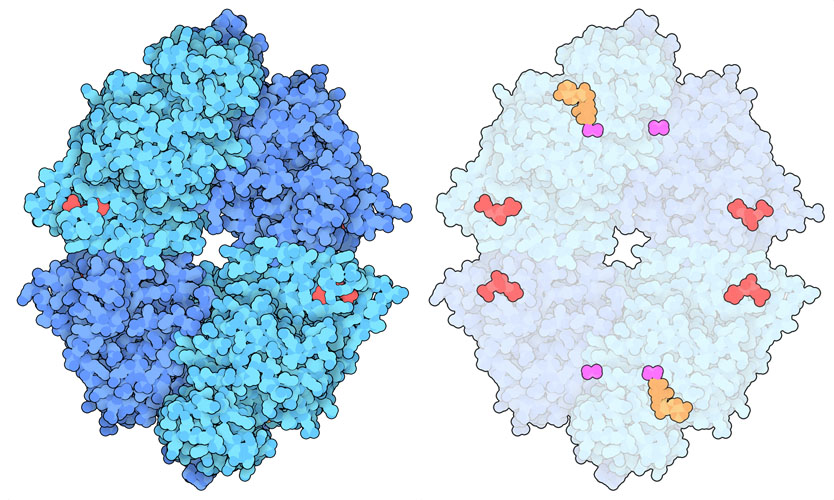 Pyruvate kinase 2 (PKM2) with fructose bisphosphate (red), ATP (orange), and oxalate (an inhibitor similar to pyruvate, purple).
Download high quality TIFF image
Cancer cells make many radical changes to support their uncontrolled growth. Surprisingly, one of these changes is reprogramming energy production pathways. In normal cells, conversion of glucose to energy begins with glycolysis in the cell cytoplasm. Pyruvate produced at the end of glycolysis normally enters the mitochondria for the citric acid cycle. In the presence of oxygen this pathway powers aerobic energy production through the action of the electron transfer chain (Complex I, III, and IV) and ATP synthase. Cancer cells take in large amounts of glucose, but paradoxically block the last step of glycolysis. Instead of entering the mitochondria, pyruvate that is made in these cells is converted to lactate.

The last step in glycolysis is catalyzed by the enzyme pyruvate kinase (PDB ID 4fxf). It catalyzes the transfer of a phosphate group from phosphoenolpyruvate to form ATP (the energy currency of cells) and pyruvate. Since it is vital for cell survival, the activity of pyruvate kinase is highly regulated. The enzyme forms two types of assemblies: a high-activity tetramer and a low-activity dimer. If more energy is required, fructose bisphosphate (a molecule formed earlier in glycolysis) promotes tetramer formation. A variety of other regulatory molecules can bind to specific allosteric sites to promote dimer formation, and decrease enzyme activity. Four different types of tissue-specific pyruvate kinases are made in the body: PKM1 is made by cells that need a lot of energy, PKR is found in red blood cells, PKL in liver cells, while PKM2 is normally made by embryonic and other proliferating cells. The PKM1 enzyme is commonly in its tetrameric form and is constitutively active. However, the PKM2 enzyme binds to many allosteric regulators to affect its tetramer-to-dimer transition and regulate its action. Cancer cells take advantage of this regulation to reprogram their own metabolism.

Many cancer cells produce high levels of the PKM2 enzyme, shifting their energy production pathways to glycolysis. This metabolic reprogramming is paradoxical for two reasons - firstly these cells do not perform aerobic energy production, even when oxygen is plentiful; secondly, even though these rapidly dividing cells require more energy than normal cells, they use glycolysis, a markedly less energy-efficient process, as the major source of energy. The solution to this paradox lies in another consequence of the metabolic bottleneck created by slowing PKM2: it causes a build up of various metabolic intermediates from previous steps in glycolysis. These intermediates are directed to many biosynthetic pathways, allowing cancer cells to build protein and nucleic acid building blocks needed for rapid growth. Thus, cancer cells prioritize growth over energy production. This reprogramming of glucose utilization is referred to as the Warburg Effect, named after Otto Heinrich Warburg, the researcher who discovered it. 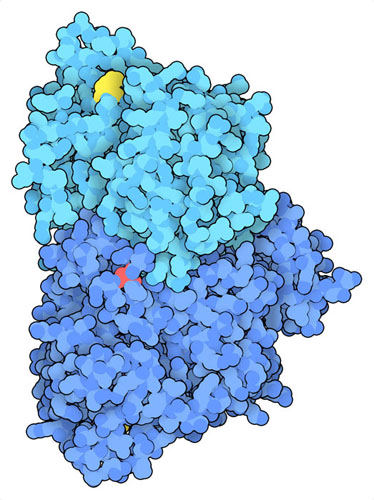 The dimeric form of PKM2 with a site of phosphorylation (serine 37) in yellow and a site of acylation (lysine 433) in red.
Download high quality TIFF image

The Warburg Effect and Cancer Treatment

The Warburg Effect is a common hallmark of tumorigenesis. Since its discovery, researchers have found that PKM2 is phosphorylated and acetylated in cancerous cells (PDB entry 6wp3). These modifications affect the binding sites of activators such as fructose bisphosphate. Without these activators, PKM2 cannot efficiently form the high-activity tetramers. The dimeric form of the enzyme is not only less active in glycolysis but can also move into the nucleus to promote the transcription of other cancer-causing genes. These changes in turn cause a buildup of lactate that supports tumor progression and resistance to cancer therapies. Since PKM2 plays key roles in reprogramming cancer cells, scientists are now looking for drugs and therapies to block it or devise other ways to activate aerobic metabolism.

Structures of the PKM2 tetramer reveal how different small molecules cause allosteric shape changes in the protein that help regulate its action. The active form is shown at left (PDB ID 4fxf) with ATP, oxalate and magnesium in the active site, and fructose bisphosphate (FBP) in a regulatory site. The inactive form is at center with alanine in a regulatory site (PDB ID 6gg3)—notice that it has shifted shape and is now narrower through the middle. Researchers are actively looking for drug molecules that bind to PKM2, for use in cancer treatment. For example, an artificial activator molecule (magenta) is bound in the structure at right (PDB ID 3me3) along with FBP, shifting the molecule to the active form and hopefully reversing the Warburg Effect in cells treated with it.

doi:10.2210/rcsb_pdb/mom_2022_6
About Molecule of the Month
The RCSB PDB Molecule of the Month by David S. Goodsell (The Scripps Research Institute and the RCSB PDB) presents short accounts on selected molecules from the Protein Data Bank. Each installment includes an introduction to the structure and function of the molecule, a discussion of the relevance of the molecule to human health and welfare, and suggestions for how visitors might view these structures and access further details.More