Molecule of the Month: HER2/neu and Trastuzumab

This article was written and illustrated by Sol De Leon Cruz, Amber Herrod, Katherine H. Park, and Amy Wu Wu as part of a week-long boot camp for undergraduate and graduate students hosted by the Rutgers Institute for Quantitative Biomedicine. The article is presented as part of the 2022-2023 PDB-101 health focus on “Cancer Biology and Therapeutics.” 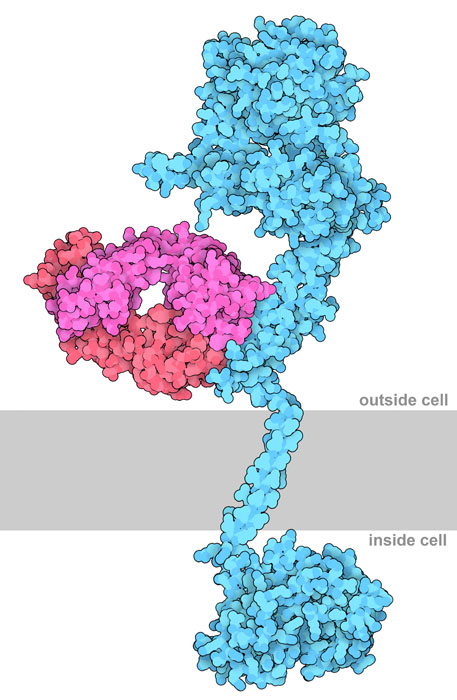 Trastuzumab (red/pink) antibody is bound to HER2 (blue). The cell membrane is shown schematically in gray.
Download high quality TIFF image
Breast cancer is the leading cause of cancer-related deaths in women worldwide. Approximately 20% of invasive breast cancers have excess amounts of human epidermal growth factor receptor 2 (HER2), also known as neu or ErbB2. This can happen when the HER2 gene makes too many copies of itself (HER2 gene amplification), which can lead to overproduction of HER2 receptors (HER2 protein overexpression). Patients with too much HER2 have decreased survival rates and poorer responses to chemotherapy and hormone treatment, due to the uncontrolled growth and division of breast cancer cells. Understanding the mechanism of action and three-dimensional structure of HER2 is helping scientists discover new and effective treatments to fight these problems.

The Odd One Out

HER2 belongs to a family of four tyrosine kinase receptors (HER1, HER2, HER3, and HER4) found embedded within the plasma membranes of many cells around the body. These receptors normally regulate important biological processes such as cell growth and proliferation, metabolism, survival, and differentiation. HER receptors can exist in two conformations: tethered and extended. In the tethered form, the protein is folded on itself and unable to partner with itself or another receptor. The open, extended shape, however, is formed through interaction with their ligands and is free to form complexes and participate in signaling. HER2 is unique among this class of tyrosine kinases because it always adopts an extended shape without the need for a ligand, making it an ideal binding partner and major contributor in tumor development. In normal signaling pathways, HER2 generally forms complexes with other HER receptors. In cancerous cells, however, the higher concentration of HER2 causes the formation of active dimers with itself in addition to more of the normal complexes with other HER receptors, sending stronger signals to the cell to reproduce.

Structural understanding of HER2 is helping to discover new effective therapies for breast cancer. Trastuzumab, a laboratory-created monoclonal antibody, is a HER2-targeted therapy approved by the FDA (Food and Drug Administration). Trastuzumab binds to the HER2 receptor, blocking its homodimerization. This inhibits cell proliferation and replication, and ultimately slows the growth of HER2-positive breast cancer. The illustration shown here is built from three PDB entries: the extracellular domain with the Fab portion of trastuzumab is from 1n8z, the kinase domain inside the cell is from 3pp0, and the transmembrane domain is from 2ks1. Unfortunately, despite this clinical benefit, the overall impact of the antibody is limited due to resistance that is often acquired after administration of trastuzumab. 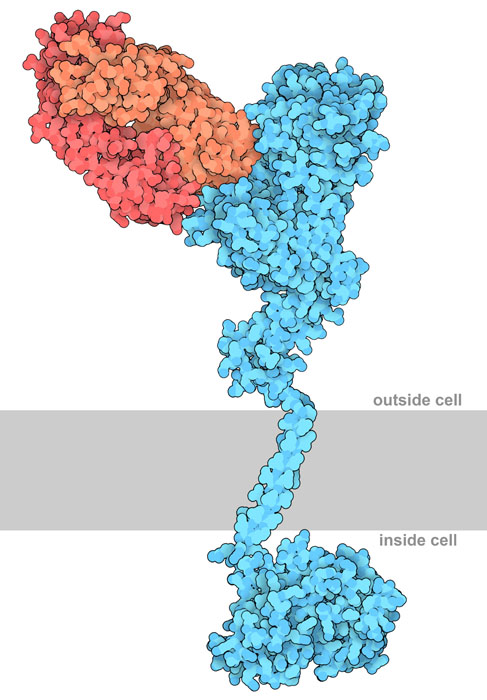 Pertuzumab (red/orange) antibody is bound to HER2 (blue) at a different location compared to trastuzumab. The cell membrane is shown schematically in gray.
Download high quality TIFF image

Trastuzumab has drastically improved the prognosis of HER2-positive breast cancer patients. However, approximately 50-60% of HER2-positive breast cancer patients acquire resistance and stop responding to the antibody. Scientists have tackled this issue by introducing Pertuzumab, a new antibody that also targets HER2, but in a different way. As seen in PDB entry 1s78, it binds farther up the molecule away from the membrane, blocking a binding pocket that HER2 uses to heterodimerize with other HER receptors. Pertuzumab particularly prevents formation of HER2:HER3 complexes, which play a key role in oncogenesis. Pertuzumab is also FDA-approved, and by blocking the HER2 signaling cascade at its source, it has contributed to overall higher survival rates and better responses, especially in patients who failed to respond to treatments previously.

HER2 with Pertuzumab and Trastuzumab 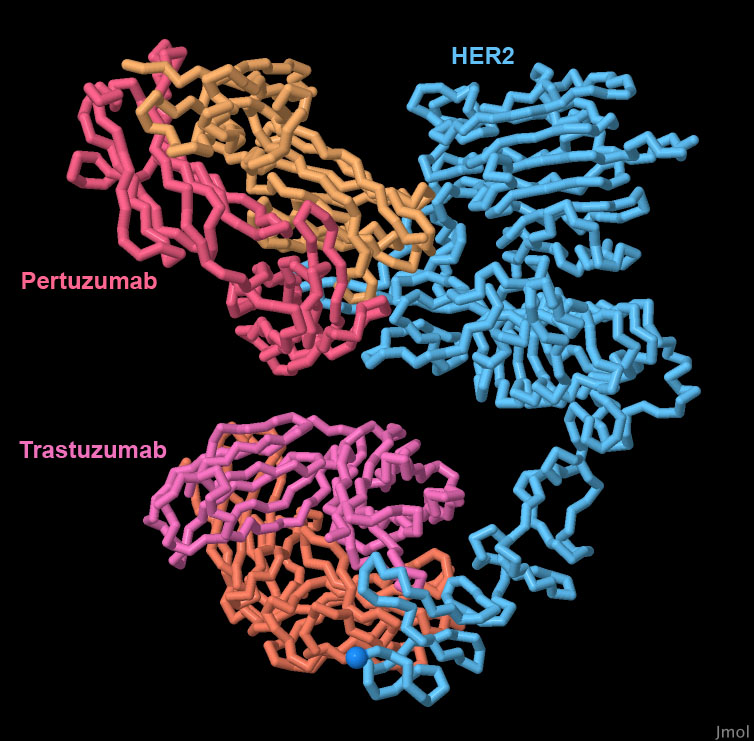 The availability of two different therapeutic antibodies has a great advantage. Using a combination of trastuzumab and pertuzumab simultaneously, known as Dual-HER2 inhibition, overcomes trastuzumab resistance and may also help suppress development of resistance in patients. When HER2 is attacked in two different locations (as seen here from PDB entry 6oge), it is more difficult for the protein to mutate and become resistant to both therapies at the same time. Additionally, this combination assists in targeting many of the functional elements of HER2 that contribute to the progression of breast cancer. Trastuzumab alone blocks homodimerization, but leaves the HER2 heterodimerization arm functional. In contrast, pertuzumab has the ability to block heterodimerization. The combination reaps the benefits of both arresting cell growth (trastuzumab) and preventing HER2:HER3 activation (pertuzumab). Dual anti-HER2 treatments have been shown to improve outcomes in patients significantly when compared to using a single drug. To explore this structure in more detail, click on the image for an interactive Jsmol.

doi:10.2210/rcsb_pdb/mom_2022_4
About Molecule of the Month
The RCSB PDB Molecule of the Month by David S. Goodsell (The Scripps Research Institute and the RCSB PDB) presents short accounts on selected molecules from the Protein Data Bank. Each installment includes an introduction to the structure and function of the molecule, a discussion of the relevance of the molecule to human health and welfare, and suggestions for how visitors might view these structures and access further details.More