Molecule of the Month: Cyclin and Cyclin-dependent Kinase 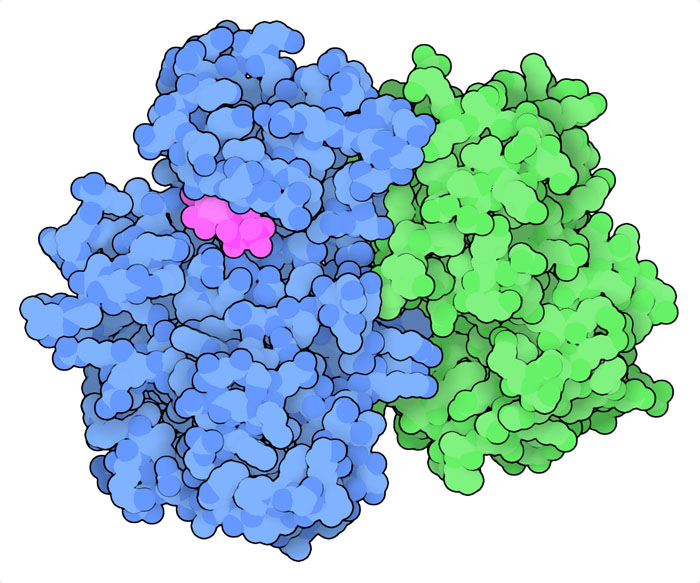 Cyclin A (green) and cyclin-dependent kinase 2 (blue) with ATP (magenta).
Download high quality TIFF image
Division of cells is tightly regulated, and for very good reason. During early development of an embryo, many cells divide and multiply. But later in life, most cells have taken on specialized tasks and don’t need to divide any more. Only a few types of cells, such as skin cells and cells of the immune system, need to keep dividing. A collection of cyclins and cyclin-dependent kinases (CDK) together control when cells divide and when they don’t. Control is absolutely essential, since uncontrolled growth is one of the hallmarks of cancer.

Growth and division of cells is cyclic, split into several distinct phases. In the G1 phase, the cell synthesizes all of the proteins, ribosomes, and other machinery that it will need. When it has enough, it moves to the S phase, where the DNA is replicated. After a gap phase called G2, the cell moves to the M phase of mitosis, the cell divides, and the two cells can then start the cycle all over again. Transitions between these phases are controlled by different cyclins and CDKs, which guard checkpoints that allow passage from one phase into the next.

Cyclins and CDKs work together to guard the checkpoints. Cyclin levels are usually kept low, through the action of ubiquitin and proteasomes. When conditions are appropriate, cyclin levels are allowed to rise, and they bind to their partner CDKs, as seen here in PDB entry 1fin. The kinase then phosphorylates itself, which enhances its action, and then phosphorylates many proteins for DNA synthesis, cell division, and other tasks that are needed at that particular stage in the cell cycle. 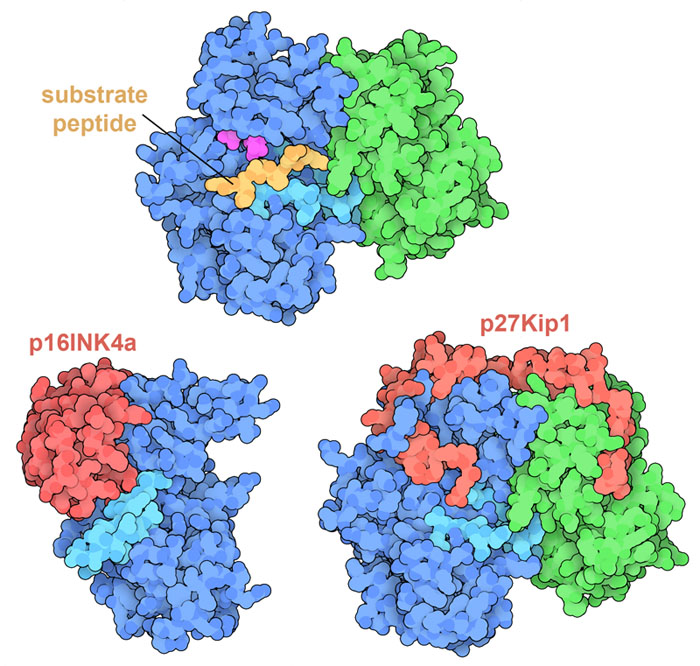 In the structure at top, a small peptide from a target protein (yellow) is bound in the active site of cyclin-dependent kinase. In the two structures at the bottom, inhibitory proteins (red) are blocking the action of the kinase.
Download high quality TIFF image

Many additional proteins help regulate cell-cycle control. The two shown here bind to CDK6 and slow its action, for example, when DNA damage needs to be repaired before moving into DNA replication. INK4 inhibitors (shown here from PDB entry 1bi7) bind to CDK and cause a key active site loop (in lighter blue in the figure) to move, inactivating the protein and impacting its interaction with cyclin. Kip1 inhibitors (shown here from PDB entry 1jsu) insinuate into the active site, blocking ATP binding. Compare these structures to the one shown at the top (PDB entry 1qmz), which includes an active complex of cyclin and CDK bound to a small peptide from a target protein. 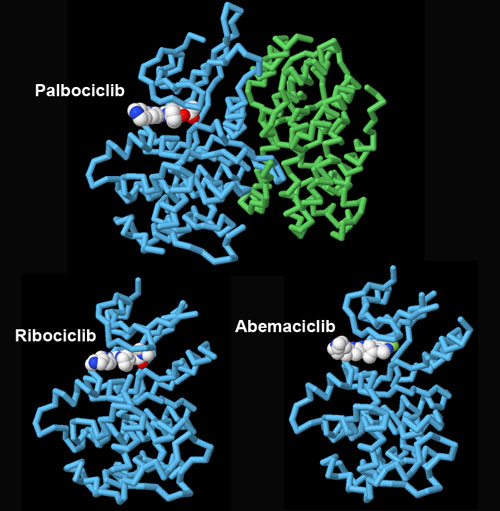 CDK enzymes are targets for cancer chemotherapy, since by blocking them, we can block the abnormal growth of tumor cells. Much effort has been focused on CDK4 and CDK6, which guard a key restriction point before the cell starts DNA replication. Structures of three US FDA-approved drugs are shown here (PDB entries 2euf, 5l2t and 5l2s), all of which were discovered through structure-based design. They all have different chemical structures, but bind in a similar way to the active site of the enzyme, blocking its ability to bind to ATP and phosphorylate target proteins. To compare these structures in more detail, click on the image for an interactive JSmol.

doi:10.2210/rcsb_pdb/mom_2019_8
About Molecule of the Month
The RCSB PDB Molecule of the Month by David S. Goodsell (The Scripps Research Institute and the RCSB PDB) presents short accounts on selected molecules from the Protein Data Bank. Each installment includes an introduction to the structure and function of the molecule, a discussion of the relevance of the molecule to human health and welfare, and suggestions for how visitors might view these structures and access further details.More