Molecule of the Month: Two-component Systems

Bacteria respond to their environment with two-component sensing systems. 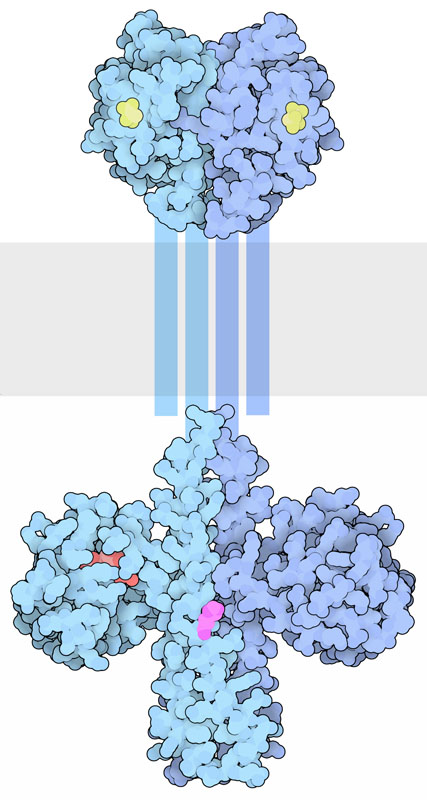 This picture combines portions from two different bacterial two-component proteins. A sensory domain is shown at the top with bound citrate molecules in yellow, and a histidine kinase domain is shown at the bottom with ATP in red and the histidine in magenta. The bacterial membrane is shown schematically at center.
Download high quality TIFF image
Bacteria live at the mercy of their environment, much more so than we do. Our bodies help to buffer changes in temperature or resources, and we can always pick up and walk away if things get really bad. Bacteria don't have these options. They are tiny and are subject to large changes in conditions in their local surroundings, so they often must make due with what they have. To do this, they build a collection of several dozen sensors that probe the local conditions and decide how best to respond.

In most cases, this sensory system is quite simple, comprised of two parts. The first component is a large sensor molecule. It includes a domain that senses something-- for instance, the one shown here (PDB entry 3by8 ) senses small nutrients such as citrate. This is connected to a domain that includes a kinase (PDB entry 2c2a ), that can phosphorylate a special histidine near the center of the protein. This phosphoryl group can then be passed to an aspartate on the second component, a "response regulator", which mobilizes the appropriate action in the cell. When the sensor is activated, it sends a signal through the molecule to the kinase domain, which then either increases or decreases the phosphorylation level of the response regulator and controls the adaptive responses.

Variations on a Theme

Looking at the two-component systems in bacterial cells, we find many different variations. All are built with a similar set of parts: an input sensor, an output response regulator, and the phosphorylation machinery that connects the two. But the details are often changed for particular needs. For instance, some are entirely inside the cell, and others have a sensor outside. Some have a separate response regulator that delivers the message throughout the cell, others have it built into the sensor chain. The mechanism for communicating between the sensor and the kinase is a great mystery, under intensive study. Some scientists propose a scissoring motion that propagates down the molecule, others propose a piston-like motion. 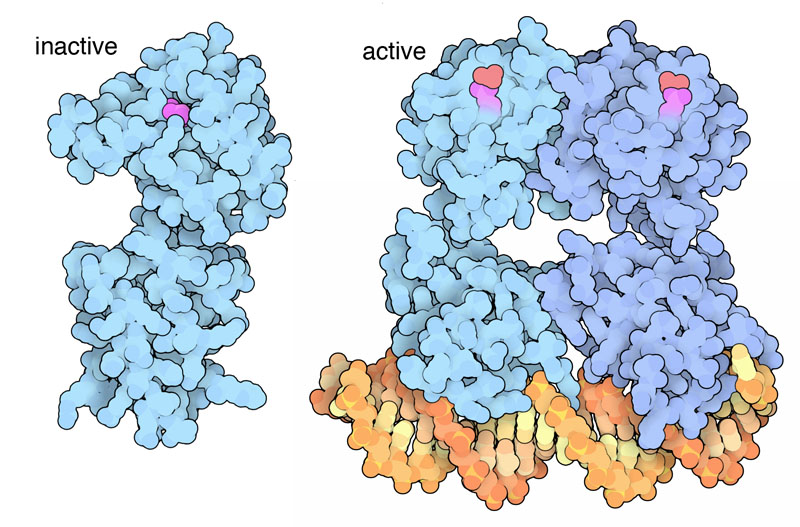 A response regulator in the inactive and active DNA-bound states. The aspartate that is phosphorylated is shown in mageta.
Download high quality TIFF image 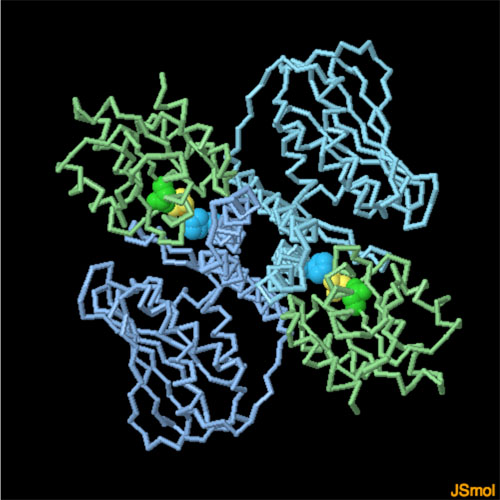 doi:10.2210/rcsb_pdb/mom_2015_10
About Molecule of the Month
The RCSB PDB Molecule of the Month by David S. Goodsell (The Scripps Research Institute and the RCSB PDB) presents short accounts on selected molecules from the Protein Data Bank. Each installment includes an introduction to the structure and function of the molecule, a discussion of the relevance of the molecule to human health and welfare, and suggestions for how visitors might view these structures and access further details.More