Molecule of the Month: Concanavalin A and Circular Permutation

For some proteins, clipped and reassembled sequences can produce the same 3D shape 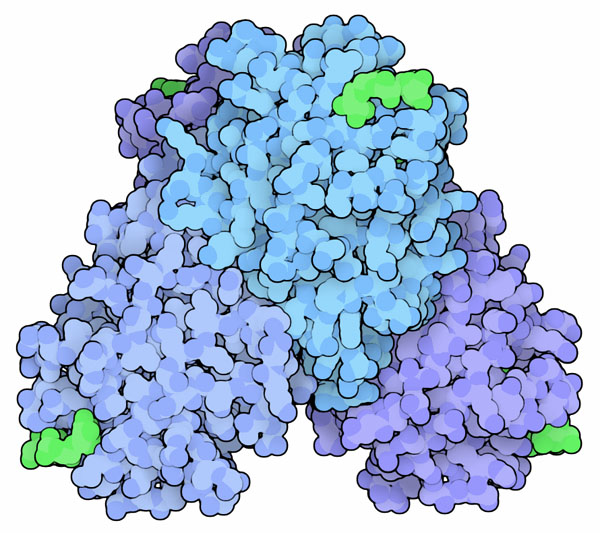 Concanavalin A, with short carbohydrate chains (green) in the four binding sites.
Download high quality TIFF image
Evolution is a great tinkerer: once a successful plan is found, it is used again and again, often with many changes and improvements. This is easily seen in the living things around us. Most mammals have four limbs, which have evolved into all manner of arms and legs, and even into flippers and wings. Most plants are covered with leaves, which range from spiny needles to huge jungle fronds. Looking at protein sequences and structures, we see the same diversity generated through variation. Proteins evolve by slow mutation of individual amino acids, but they also evolve through larger piece-wise changes, where the genes for successful proteins are clipped and reassembled in new combinations.

Circular permutation is one of the most unusual changes found in protein evolution. To understand where the name "circular permutation" comes from, imagine a folded protein that has the two ends of the chain near to one another. Now, chemically link these two ends. This would form a circular protein chain, with no ends. Then, clip the circularized chain in a different place. The folded protein would look the same, except that the two ends would be in a different place. 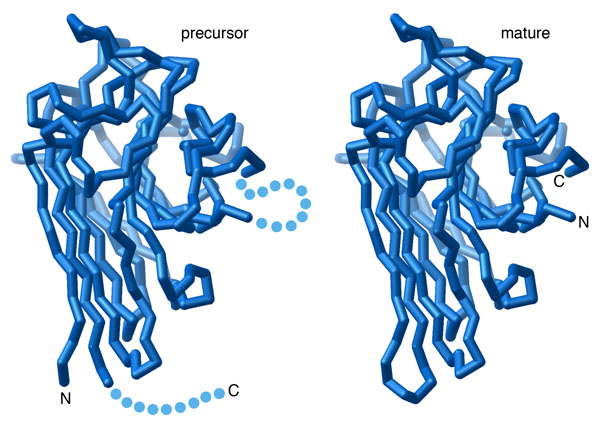 This is exactly what happens with the protein concanavalin A, a carbohydrate-binding protein found in jack beans, shown here from PDB entry 1cvn . When the amino acid sequence of this protein was determined in the seventies (by actually studying the amino acids in the protein, not looking at the gene), it was found to have a similar sequence to favin, a protein from fava beans. However, the sequence was permuted, as if the protein chain had been cut in the middle and the two halves swapped. Further study showed that in cells, concanavalin A is synthesized similarly to favin, but then a circular permutation is performed, as shown below using PDB entry 3cna . The precursor protein made by ribosomes has an extra tail and an extra loop, both shown here with dotted lines. The mature form is produced by clipping off the loop to create the new ends of the chain, and sealing up the two original ends of the chain into a new loop. 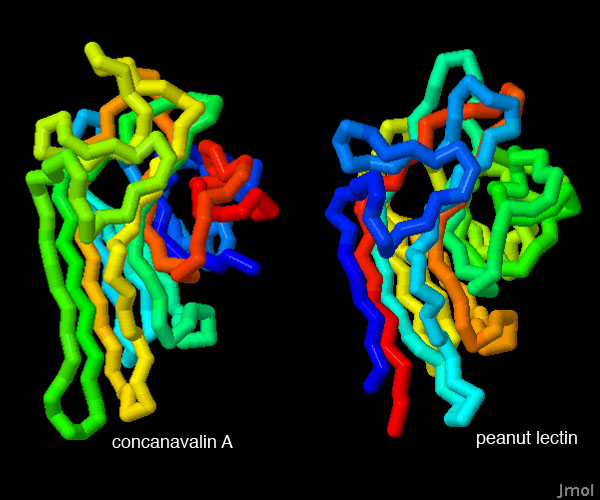 These two lectin proteins have similar folds, but the beginning (blue) and end (red) of the chains are in different locations.

Since the discovery of circular permutation in concanavalin A, many other examples have been discovered. In most cases, however, the circular permutation occurs in the genome, not by the more laborious cutting and pasting of the actual protein. In these cases, a rearrangement of the gene occurs: a portion at the front of the gene is removed and then replaced at the end. Sometimes only a single helix at one end is moved (as in the proteins in PDB entries 1ui9 and 1h0r ) and in other cases, entire domains are switched. As described in the next section, scientists have also gotten in on the action, and they have done their own circular permutations.

Circular permutation was originally discovered by comparing the amino acid sequences of concanavalin A (PDB entry 3cna ) with the sequences of other lectins, such as the peanut lectin shown here (PDB entry 2pel ). When the structures were solved years later, as expected, they showed very similar three-dimensional structures, in spite of the permutation of the chain.

Scientists are also great tinkerers. As soon as they discovered the process of circular permutation, they had to try it out themselves. The glucanase protein shown here (PDB entries 2ayh , 1ajk , 1ajo and 1cpm ) has been permuted in several different ways, by cutting the gene in different places and reassembling the two pieces. In this picture, each protein chain is colored blue at one end, red at the other, and rainbow colors in between. Notice that the overall protein fold is the same in each one, except that the ends are in a different place. This demonstrates that protein folding is a robust process, and that the protein fold is determined by the sequence, even if it's shuffled around a bit. You can explore these structures in more detail by clicking on the image for an interactive JSmol.

doi:10.2210/rcsb_pdb/mom_2010_4
About Molecule of the Month
The RCSB PDB Molecule of the Month by David S. Goodsell (The Scripps Research Institute and the RCSB PDB) presents short accounts on selected molecules from the Protein Data Bank. Each installment includes an introduction to the structure and function of the molecule, a discussion of the relevance of the molecule to human health and welfare, and suggestions for how visitors might view these structures and access further details.More