Molecule of the Month: Sodium-Potassium Pump

Cells continually pump sodium ions out and potassium ions in, powered by ATP 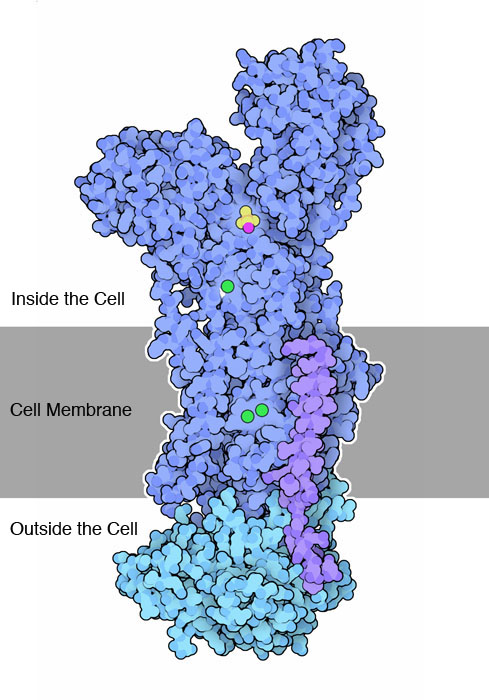 Sodium-potassium pump with potassium ions (green) in the transport sites and a phosphate analogue (yellow) in the ATP-binding site. The cell membrane is shown schematically in gray.
Download high quality TIFF image
Our bodies use a lot of energy. ATP (adenosine triphosphate) is one of the major currencies of energy in our cells; it is continually used and rebuilt throughout the day. Amazingly, if you add up the amount of ATP that is built each day, it would roughly equal the weight of your entire body. This ATP is spent in many ways: to power muscles, to make sure that enzymes perform the proper reactions, to heat your body. The lion's share, however, goes to the protein pictured here: roughly a third of the ATP made by our cells is spent to power the sodium-potassium pump.

The sodium-potassium pump (PDB entries 2zxe and 3b8e ) is found in our cellular membranes, where it is in charge of generating a gradient of ions. It continually pumps sodium ions out of the cell and potassium ions into the cell, powered by ATP. For each ATP that is broken down, it moves 3 sodium ions out and 2 potassium ions in. As the cell is depleted of sodium, this creates an electrical gradient and a concentration gradient, both of which are put to use for many tasks.

The most spectacular use of this gradient is in the transmission of nerve signals. Our nerve axons deplete themselves of sodium ions, then use special voltage-gated sodium channels to allow the ions to rush back in during a nerve impulse. The sodium-potassium pump has the job of keeping the axon ready for the next signal. The gradient also helps control the osmotic pressure inside cells, and powers a variety of other pumps that link the flow of sodium ions with the transport of other molecules, such as calcium ions or glucose.

Medicine for the Heart

A traditional cure for heart failure works by blocking the sodium-potassium pump. Plant toxins like digitalis and ouabain (PDB entry 3a3y ) and similar toxins from poisonous toads, collectively known as cardiotonic steroids, can be used in small doses to slow the pumping of ions. As the level of sodium ions builds up inside the cell, this slows the sodium-calcium exchanger, leading to a build up of calcium, which ultimately increases the force of contraction of the heart muscle. Recent research has revealed that our own cells make molecules similar to these toxins, but only in low concentrations to regulate the action of our sodium-potassium pumps. 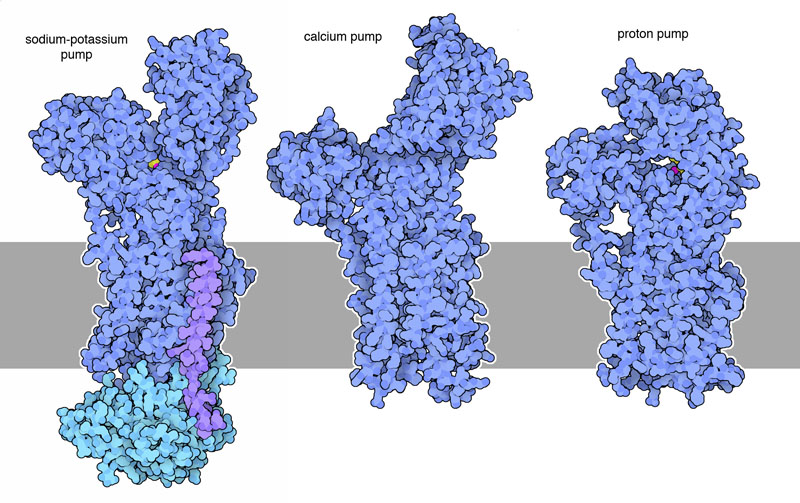 The sodium-potassium pump (shown here from PDB entry 2zxe ) is one of a large class of P-type ATPase pumps, so called because they all incorporate a phosphate-linked intermediate in their mechanism. Several other examples are currently available in the PDB. Many structures of the calcium pump are available (PDB entry 1su4 is pictured here), showing how these pumps undergo large conformational changes through the pumping cycle. Other examples include the proton pump found in plant cell membranes (PDB entry 3b8c ), and a proton-potassium pump that acidifies the stomach (PDB entry 3ixz , not shown here). The proton pump and the calcium pump are each composed of a single chain, whereas the pumps that transport potassium typically have a second smaller chain, shown here in turquoise. The structure of the sodium-potassium pump also has a third regulatory chain, shown here in purple. 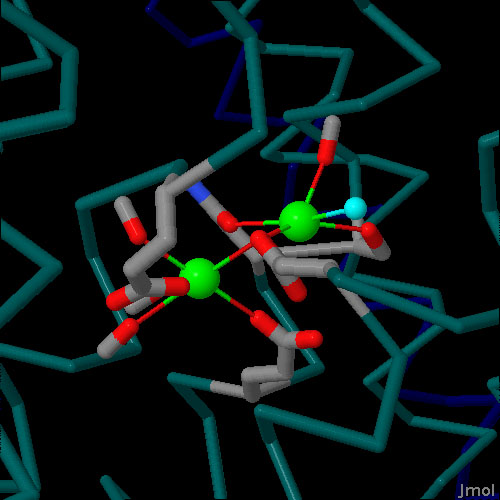 The sodium-potassium pump (PDB entry 2zxe ) is a protein machine with many moving parts. The helices that run through the membrane contain the binding sites for the sodium ions and potassium ions, and the large lobes that stick into the cytoplasm contain the machinery for linking the cleavage of ATP to the pumping cycle. The typical cycle occurs in several steps. First, the pump binds ATP and three sodium ions from the cytoplasm. The ATP then phosphorylates the pump and it shifts in shape, creating an opening towards the outside of the cell. The sodium is released and two potassium ions are picked up. Finally, the phosphate is cleaved off and the pump shifts back, releasing the potassium inside the cell. The structure shown here has captured the pump in the middle of the cycle, when the pump has just picked up its payload of potassium ions. The two potassium ions (shown here in green) are surrounded on all sides by oxygen atoms from the protein. Click on the image above for an interactive JSmol view of this interaction.

doi:10.2210/rcsb_pdb/mom_2009_10
About Molecule of the Month
The RCSB PDB Molecule of the Month by David S. Goodsell (The Scripps Research Institute and the RCSB PDB) presents short accounts on selected molecules from the Protein Data Bank. Each installment includes an introduction to the structure and function of the molecule, a discussion of the relevance of the molecule to human health and welfare, and suggestions for how visitors might view these structures and access further details.More