Molecule of the Month: Influenza Neuraminidase

Neuraminidase is an important target for influenza drugs

Ectodomain of neuraminidase (top), with Relenza (center) and Tamiflu (bottom), and three zinc fingers from Klf5 (bottom).
Download high quality TIFF image
Influenza virus is continually changing and every decade or so, a dangerous new strain appears and poses a threat to public health. In 2009, there was an outbreak of a new strain of H1N1 flu, more commonly known as swine flu. The H1N1 designation refers to the two molecules that cover the surface of the virus: hemagglutinin and neuraminidase. Together, these two molecules control the infectivity of the virus. Hemagglutinin plays the starring role as the virus approaches a cell, binding to polysaccharide chains on the cell surface and then injecting the viral genome into the cell. Neuraminidase, on the other hand, plays its major role after the virus leaves an infected cell. It ensures that the virus doesn't get stuck on the cell surface by clipping off the ends of these polysaccharide chains.

Neuraminidase, shown here at the top from PDB entry 1nn2 , is composed of four identical subunits arranged in a square. It is normally attached to the virus surface through a long protein stalk (not shown). The active sites are in a deep depression on the upper surface. They bind to polysaccharide chains and clip off the sugars at the end. The surface of neuraminidase is decorated with several polysaccharide chains (seen extending upwards and downwards in this structure) that are similar to the polysaccharide chains that decorate our own cell surface proteins.

As with hemagglutinin, neuraminidase comes in a variety of subtypes named N1-N9. These subtypes are defined by their interaction with antibodies: all of the variants within a given subtype will be neutralized by a similar set of antibodies. These subtypes are one of the causes of the continual effectiveness of influenza. Some of the subtypes promote infection in people, others promote infection in birds, and others target pigs and other mammals. As viruses spread and infect different organisms, they can mix and match different subtypes, randomly building new combinations and occasionally coming up with particularly lethal combinations.

Two effective drugs are currently used to battle influenza infection: zanamivir (Relenza) and oseltamivir (Tamiflu). These drugs were discovered using the crystal structures found in the PDB. By studying the binding of molecules to the neuraminidase active site, researchers were able to design new drug molecules that mimic the natural substrates of the enzyme. These molecules bind tightly in the active site, and block its essential role in viral release. Two structures of these drugs are shown here. At the center (PDB entry 3b7e ) is zanamivir bound to neuraminidase from the "Spanish flu" virus that caused a pandemic in 1918. At the bottom (PDB entry 2hu4 ) is oseltamivir bound to an avian flu virus. 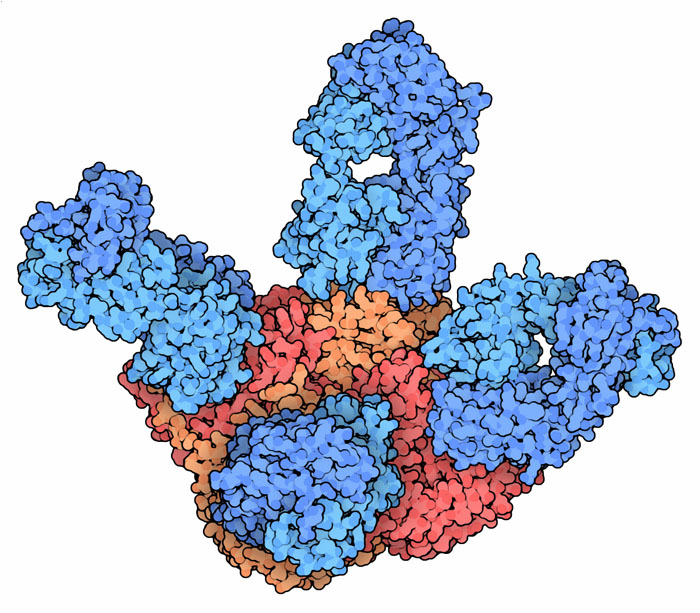 When we are infected with influenza, our immune system makes antibodies to fight the virus. The flu vaccine is a way to make the immune system ready for this protection, by challenging us with a weakened virus or harmless fragments of the virus, and spurring the immune system to make the proper antibodies before an infection. As you might expect, these antibodies recognize the proteins on the surface of the virus. The most effective ones are the ones against hemagglutinin, which block infection of new cells. Antibodies against neuraminidase, like the ones shown here from PDB entry 1nca , can reduce the severity of the flu, playing a supporting role in the fight against the virus.

When designing a drug, we walk a fine line. Drugs need to be different from the natural substrate of the enzyme so that the enzyme can't catalyze a reaction to destroy it. However, drugs must also be very similar to the natural substrate of the enzyme, so that they bind tightly and block the enzyme. It is also important to make drugs similar to the natural substrates in order to avoid drug resistance. An example of this problem is shown in these three structures. The first structure shows neuraminidase with sialic acid in the active site (PDB entry 2bat ). This structure shows us how the enzyme interacts with polysaccharides during its normal reaction. The second structure shows the binding of oseltamivir, one of the drugs used to fight influenza infection (PDB entry 2hu4 ). Notice that it is similar but not identical to sialic acid: it is slightly larger and it forces a glutamate (shown in pink) to swing upwards a bit towards a neighboring histidine (also shown in pink). The third structure is a drug resistant strain of the enzyme (PDB entry 3cl0 ). The histidine has mutated to a larger tyrosine, forcing the glutamate down against the drug. The drug still binds, but not nearly as tightly, so the polysaccharide substrates can easily displace it and the drug is no longer effective against the mutant virus. However, there is still plenty of room for the sialic acid to bind, so the enzyme still works for its normal function of viral release.

doi:10.2210/rcsb_pdb/mom_2009_5
About Molecule of the Month
The RCSB PDB Molecule of the Month by David S. Goodsell (The Scripps Research Institute and the RCSB PDB) presents short accounts on selected molecules from the Protein Data Bank. Each installment includes an introduction to the structure and function of the molecule, a discussion of the relevance of the molecule to human health and welfare, and suggestions for how visitors might view these structures and access further details.More